From young gender equality advocates to high-ranking government officials, key stakeholders from North America, Europe, the Caucasus and Central Asia called for the urgent realization of women’s and girl’s human rights and for turning the commitments to gender equality into reality at the regional review meeting of  the Beijing Declaration and Platform for Action (Beijing+25).

In the lead up to the 25th anniversary of the Beijing Declaration and Platform for Action, the most visionary agenda for gender equality and women’s rights, more than 850 participants, including high-level government officials, and representatives of the civil society and international organisations from North America, Europe, the Caucasus and Central Asia, gathered in Geneva on 29-30 October to take stock of progress on the Beijing commitments.

Despite progress, many of the challenges addressed in Beijing remain a reality in the 56 countries members of the UN Economic Commission for Europe (UNECE). “2020 is an important year in terms of gender equality and women's rights. It's not enough to have hope, we need decisive actions. We need to change mindsets and traditions,” stressed Altynai Omurbekova, Deputy Prime Minister of the Kyrgyz Republic, co-chair of the meeting.

The Beijing+25 Regional Review Meeting, jointly hosted by UNECE and UN Women, reviewed progress and persisting challenges, showcasing practical policy approaches that can help remove the structural barriers that hold women back from equal participation in all areas of life. Participants stressed the need for faster and stronger progress for women and girls and urgent realization of the commitments to uphold their human rights. Over the last five years, countries in the region have put a particular focus on three main areas: combating violence against women, women's economic empowerment and political participation. 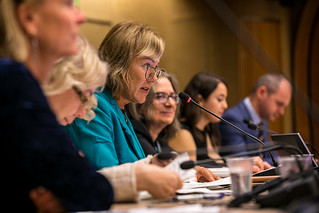 "For the first time, the strategic objectives of the Beijing Platform for Action can be linked to a time-bound framework – that of the 2030 Agenda for Sustainable Development. Let’s work together to turn the goal of gender equality into a reality by 2030," stated UNECE Executive Secretary Olga Algayerova.

“A quarter of a century after Beijing, not a single country has achieved gender equality. Beijing+25 and the global drive to achieve the Sustainable Development Goals provide us a unique opportunity to accelerate efforts, strengthen our partnerships and mobilize all of society, including all generations, to fulfill the longstanding commitments to women and girls,” said Åsa Regnér, Assistant Secretary-General of the United Nations and Deputy Executive Director of UN Women.

Key conclusions of the Beijing+25 Regional Review MeetingParticipants identified the below key conclusions after two days of intense discussions:

The assessment of the regional review will feed into the global Beijing+25 review in 2020 which will take place at the 64th session of the Commission on the Status of Women in March 2020. In September 2020, the General Assembly is expected to convene a one-day high-level meeting to celebrate the twenty-fifth anniversary and accelerate the realization of gender equality and the empowerment of all women and girls.