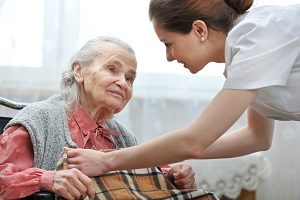 Statistics on social and demographic topics are usually produced from surveys of individuals living in private households. But what about older people who are not part of a private household, but who instead live in an institution, such as a care home or assisted living centre?

Such people are often excluded from data collection because it can be complicated and expensive to identify and sample the institutions and their residents. But with the rapid spread of COVID-19 among care home residents and the realization that in many countries these people were initially being missed out of national mortality and infection statistics, the importance of data about this part of the population has never been more apparent. In his policy brief The Impact of COVID-19 on Older Persons, United Nations Secretary-General António Guterres highlighted the crucial need for data on all age groups and covering all living arrangements, including older peoples’ institutions.

Populations across the UNECE region and throughout the world are growing older, and for many countries this means that the population of older people living in institutions is increasing. Even in those countries where this group is not growing, the small population of older people in institutions may be very distinctive, with different characteristics from those of the population of older people living in private households, and may consist of a significant number of people. For example a 2015 survey in the United States estimated that there were 1.3 million nursing home residents, among whom 84 per cent were aged 65 or over. If the topic being measured is strongly correlated with the likelihood of living in an institution—for example, dementia, physical disabilities, financial status or subjective well-being—then missing this group out of data collection will result in biased statistics.

Producers of statistics have long known that this risk of bias exists, but have lacked any quantifiable evidence of how big the bias is, or any guidance on what to do about it. Simply advising countries to include institutional populations of older people in all data collection would be unrealistic. Yet with the 2030 Agenda for Sustainable Development calling on decision-makers to reach the furthest behind first, statistics on this often-overlooked population, many of whom are among the most vulnerable members of our societies, are necessary to help governments and service-providers better understand the complex needs of these people.

The UNECE Recommendations for Measuring Older Populations in Institutions, published today, guide national statistical offices in deciding whether, when and how to include institutional populations of older people in the production of ageing-related statistics. The publication, prepared by a task force of international experts led by the United Kingdom’s Office for National Statistics, examines definitions and classifications; proposes a methodology for quantifying bias; and considers the challenges for survey design and data collection, including techniques for using administrative data sources and ethical considerations specific to this group.

Taking a survey questionnaire that is used in households and asking the same questions of older people in institutions will often be inappropriate—questions about household income, or how much the household spends on food, would simply not make sense and need to be adapted, while other topics, such as personal relationships and reproductive health, must be approached with care. The Recommendations suggest adjusting questionnaires and avoiding the use of proxy respondents (where someone else answers on behalf of the older person) to the greatest extent possible. But they also warn against falling prey to ageist stereotypes by skipping topics altogether.

UNECE, through its Working Group on Ageing, has for many years played a key role in guiding and monitoring policies related to older people and to ageing populations in the region. In 2016 the UNECE Recommendations on Ageing-related Statistics drew attention to the changing landscape of data and statistics on older people. The 2016 Recommendations highlighted both the need to collect information on topics that particularly affect older people, and the need to ensure that older people are adequately included in data collection on all topics, as well as being appropriately represented when statistics are published by ensuring sufficient age-disaggregation.

The new guidance released today responds to that call, recognizing that just as populations change, so must the approaches we adopt to understand the experiences and needs of their members by collecting  data and producing statistics. With all eyes currently on the well-being of older people in care homes, these recommendations come at the ideal moment to shine a spotlight on a group often left out of national statistics. The guidance is already informing practices in Slovenia, where it was used to examine the impact of the population of older people living in institutions on the register-based census.