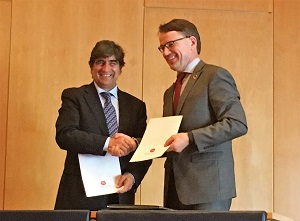 Most people who are in desperate need to access water and sanitation services reside in low and middle-income countries, where financing solutions to bridge the enormous infrastructure gap, estimated at $1 trillion per year, are urgently needed. It is widely recognised that involving private sector finance and expertise into the delivery of public service and the running of infrastructure is an efficient way to bridge the infrastructure gap. However, governments in low and middle-income countries lack the capabilities to design, procure and manage PPP projects, which is stopping them from delivering projects that are beneficial to the community and that lower the costs and increase the efficiency of services.

To address these challenges, UNECE and Portugal have agreed to establish an International Centre of Excellence on PPPs in water and sanitation. The Centre, affiliated to the UNECE International PPP Centre of Excellence in Geneva, will be hosted by the National Laboratory of Civil Engineering (LNEC) in Lisbon with the support of the Ministry of Environment of Portugal.

UNECE Executive Secretary, Mr. Christian Friis Bach, and the Secretary of State for the Environment in Portugal, Mr. Carlos Martins, launched this project in Lisbon on 17 May 2017 with the signing of a Memorandum of Understanding.

“This initiative provides an excellent opportunity to further exploit the synergies between the UNECE work on people-first Public-Private Partnerships and the UNECE/-WHO/Europe Protocol on Water and Health. The Centre in Lisbon is the perfect vehicle to promote and disseminate this useful work to the international community.”

Speaking on behalf of the Portuguese Government, Mr. Martins declared that this initiative: