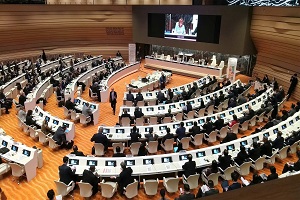 Ministers of Transport and high-level officials from across the globe came to the Transport Week of the 81st plenary session of the Inland Transport Committee (ITC), to debate on cutting-edge issues, including automation and digitalization in transport, and participate in the discussion of a comprehensive strategy to guide the future of inland transport into a safer, more sustainable future in line with the objectives of the Sustainable Development Goals.

The Inland Transport Committee reached consensus and adopted its 2030 Strategy today. This new strategy is meant to create a worldwide framework for inland transport that is safe, sustainable, accessible, and a benefit to all societies. The ITC has more than 70 years of experience in creating safer, more comprehensive and accessible mobility.  It is already the platform for UN Conventions and legal instruments that provide regional and global standards for everything from road safety to cross-border transport facilitation and is already where governments and policy makers come to discuss and negotiate common transport standards. The ITC has a proven track record of making inland transport more beneficial to the societies of its Contracting Parties. Therefore, one of the key aspects of this strategy is to fully engage the Contracting Parties so that it may benefit more countries and more people then ever before.

The Contracting Parties to legally binding conventions administered by ITC and its Working Parties currently include 147 United Nations Member States, in addition to two observer states and a non-state actor. The adoption of this strategy signals the further opening up of the Conventions under its purview to the entire 193 member States of the UN. This is meant to increase access to and implementation of the legal instruments and tools, which act as a blueprint for safer, more sustainable and accessible mobility.  This will indeed mark a turning point to developing countries many of which do not take advantage of these legal interments but stand to benefit the most by them.

The strategy has four pillars which are meant to harmonize inland transport developments worldwide and create the safest and most sustainable mobility. These key elements include promoting and maintaining the UN Transport Conventions many of which promote safety and high standards globally.   Secondly, supporting the development of new technologies and innovations in transport with universal standards so that vehicles can operate internationally, and standards are set for technical advancement to move forward cooperatively.  Thirdly, promoting interregional and global inland transport policy dialogues, which the ITC has been the key platform for over the last seven decades. Lastly, promoting sustainable regional and interregional inland transport that is interconnected and allows greater mobility.

The Strategy was adopted unanimously by the ITC.

The new strategy is in many ways a culmination of the Committee’s history.  The ITC, which was founded after World War II to reestablish inland transport within Europe, has become the UN standard setting body in the field of inland transport. With its subsidiary bodies, the ITC has provided a pan-European intergovernmental forum, where UNECE member countries have come together to forge tools for economic cooperation and negotiate and adopt international legal instruments on inland transport.

At the beginning of the ITC’s annual session, two days were dedicated to finding harmony and cooperation in the development of new technologies in autonomous vehicles and automation in transport.  This cooperation in the setting of common standards and terminology is at the heart of the new ITC strategy:  countries coming together, working as one to achieve the best possible outcomes in response to common goals.

While technological developments in transport was the key theme of the 81st ITC, a range of topics were addressed such as road safety, including the establishment of the United Nations Road Safety Trust Fund; Intelligent Transport Systems, digitalization; e-documents, including eCMR and eTIR; the transport of dangerous goods; border-crossing facilitation and much more.