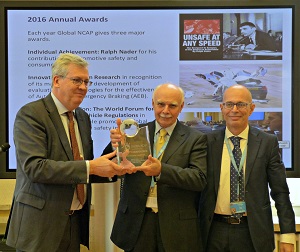 The World Forum for Harmonization of Vehicle Regulations received Global NCAP’s Annual Award in recognition of its role promoting global regulations for vehicle safety in the interests of consumer protection.

The award was handed over by David Ward, Secretary General of Global NCAP, to Boris Kisulenko, Chair of the World Forum, and Antonio Erario, Vice-Chair, during the Forum’s 170th session.

David Ward stated: “The Forum is responsible for the world’s most important vehicle safety standards. It provides all countries with a fast track method to apply regulations that promote crash worthiness and crash avoidance. Crucially also it is an intergovernmental forum that gives a voice of the consumer as new regulations are developed”.  He also stressed that the UNECE region, where the application of WP29 regulations is the highest, has the lowest fatality rate per hundred thousand kilometres in the world despite many decades of increases in vehicle kilometres driven.

Boris Kisulenko said: “I am very glad to accept this award in the name of the World Forum. Global NCAP and the NCAP family’s rating systems play an important role in increasing vehicles safety by offering car makers a widely accepted tool to promote those models that comply with or exceed the safety measures enacted in the Forum’s regulations”.

Antonio Erario thanked Global NCAP for its valuable input to the Forum’s discussions and said: “This award will be an incentive for the World Forum to continue developing new regulations and amend existing ones to permanently increase vehicles’ safety”.

Commenting on the award, UNECE Executive Secretary Christian Friis Bach said: “This award is a recognition of the key role of the World Forum in increasing vehicle safety over the past six decades. It also shows the crucial importance that these norms and regulations have played in saving lives and avoiding injuries. I therefore call on all UN member States to fully apply the UN technical regulations for the construction of vehicles developed by the World Forum. I also urge the motor industry as a whole to ensure that all vehicles comply with the core safety standards established under these regulations regardless of where in the world the vehicles are sold.”Note to editors

UNECE is the custodian of 58 UN conventions and agreements in the field of in-land transport, addressing most aspects of road safety.  The World Forum for Harmonization of Vehicle Regulations (WP.29) is a Working Party within the United Nations Economic Commission for Europe's Inland Transport Committee. It manages three Global Agreements on vehicles. Any country that is member of the United Nations may participate in the activities of the World Forum and accede to the Agreements.