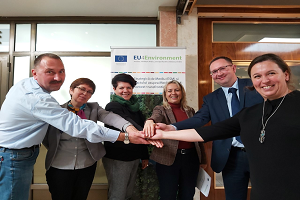 UNECE and the European Union help Moldovan authorities to align national legislation and practices with international commitments, through the EU-funded regional programme, “European Union for Environment” (EU4Environment). The programme aims at greening economies in the six Eastern Partnership countries (Armenia, Azerbaijan, Belarus, Georgia, the Republic of Moldova and Ukraine) based on EU funding of nearly 20 million euros.

Work on SEA and transboundary EIA that the UNECE secretariat to the Espoo Convention and its Protocol leads, is one of many elements of EU4Environment. In Moldova, this work was launched on 1 November at a workshop organized by UNECE and the Ministry of Agriculture, Regional Development and Environment. This workshop brought together governmental agencies and environmental NGOs for discussing the benefits of SEA, as well as specific procedures, roles and responsibilities in its application. The workshop paved the way for further capacity- and institutional building, including training and guidelines on quality assurance of SEA documentation and, later, a pilot project on SEA. Previously, from 2013 to 2018, the EU and UNECE helped Moldovan authorities to develop and adopt relevant legislation and create initial capacities for conducting environmental assessments, including two pilot projects on SEA.

“The Republic of Moldova recently becoming a Party to the Protocol on SEA further demonstrates the important efforts made by the country to comply with international requirements for SEA. Today’s event will support it in further promoting the effective application of SEA.” said Mr. Leonid Kalashnyk, EU4Environment Project Manager at UNECE.