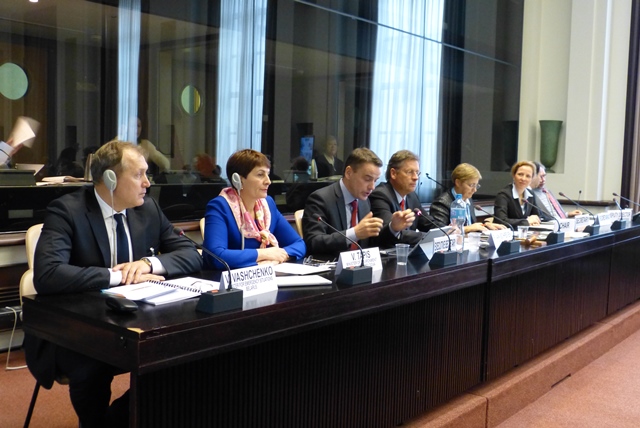 The inclusion of new categories of hazardous substances, such as flammable aerosols and organic peroxides, will also mean that the Convention will extend to new industries, such as the cosmetics industry. The list of named substances or chemicals covered by the Convention now covers a total of 44 substances, including widely used substances like oxygen, liquefied petroleum gas, natural gas and methanol. Substances of particular concern to human health and the environment are also explicitly included like carcinogens, arsenic compounds and dioxins. The amended annex I will enter into force by the end of 2015.

Parties also agreed to proceed with the development of other amendments to the Convention in order to strengthen its public participation provisions and to align its definitions with other legal instruments, including two UNECE treaties — the Aarhus Convention on Access to Information, Public Participation in Decision-making and Access to Justice in Environmental Matters and the Espoo Convention on Environmental Impact Assessment in a Transboundary Context. It was also decided that the Conference of the Parties should develop further guidance on the Convention’s implementation, including in the areas of land use planning and the siting of hazardous activities.

Another focus of the meeting was the tenth anniversary of the Assistance Programme, which was adopted in 2004 to support the countries in Eastern and South-Eastern Europe, the Caucasus and Central Asia in their efforts to enhance industrial safety. During a high-level segment, delegates recognized the Assistance Programme’s achievements, witnessed through improvements in regulatory frameworks and institutional structures governing industrial safety, as well as in cooperation among authorities with industry, the public and neighbouring countries. Ms. Valentina Tapis, Minister of the Environment of the Republic of Moldova, noted that the Programme had made it possible “to work on legislation, standards and the methods necessary for the national authorities to ensure adequate industrial safety”, while Mr. Vladimir Vaschenko, Minister of Emergency Situations of Belarus, drew attention also to the “tremendous work” that still lay ahead “to improve oversight mechanisms for the safe conduct of industrial activities, to assess the consequences of past accidents and to prepare to respond to them through joint exercises with neighbouring countries”.

UNECE Executive Secretary Christian Friis Bach stressed the importance of partnerships in implementing assistance activities, “not only between the countries in the UNECE region, but also with all relevant stakeholders”, including other environmental treaties, other United Nations, international and non-governmental organizations and industry. Mr. Roderick van Schreven, Ambassador of the Netherlands and Chair of the Economic Commission for Europe, stressed the solidarity between the countries in the UNECE region working through the Assistance Programme for over a decade.

Parties to the Convention  decided  to demonstrate the Assistance Programme’s effectiveness and document its impact to enhance industrial safety standards in participating countries as well as to further develop the  Programme in future with a view to enriching cooperation and exchange of experiences among the target countries striving to improve industrial safety.

The 1992 Convention on the Transboundary Effects of Industrial Accidents is designed to protect people and the environment against industrial accidents. The Convention aims at preventing accidents from occurring, or reducing their frequency and severity and mitigating their effects if they should occur. To date there are 41 Parties to the Convention, which include, besides the European Union (EU) and 25 of the EU member States (excluding Ireland and Malta), Albania, Armenia, Azerbaijan, Belarus, Bosnia and Herzegovina, Kazakhstan, Monaco, Montenegro, Norway, the Republic of Moldova, the Russian Federation, Serbia, Switzerland and the former Yugoslav Republic of Macedonia.