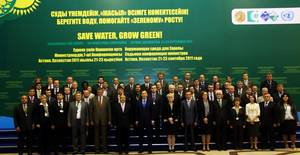 GenevaThe 7th “Environment for Europe” (EfE) Ministerial Conference, held in Astana from 21 to 23 September 2011, concluded on the commitment by the Governments of the UNECE region to take the lead in the transition to a green economy. The Conference gathered more than 1,500 participants, from Governments, the international community, civil society, business and the media, in the capital of Kazakhstan to discuss two main themes: Sustainable management of water and water-related ecosystems; and Greening the economy: mainstreaming the environment into economic development. Participants discussed at length the findings of the two main reports produced for the Conference: Europe’s Environment – An Assessment of Assessments prepared under the leadership of the European Environment Agency (EEA) and the Second Assessment of Transboundary Rivers, Lakes and Groundwaters developed under the auspices of the UNECE Convention on the Protection and Use of Transboundary Watercourses and International Lakes (Water Convention).On the day of the opening, UNECE Executive Secretary Ján Kubiš received the "Josef Vavroušek Honourable Award" awarded to UNECE by The Charta 77 Foundation and The Environmental Partnership Foundation in recognition of its extraordinary contribution and support to the EfE procees initiated by Josef Vavroušek , then Minister-Chairman of the Federal Committee for the Environment of the Czech and Slovak Federal Republic in 1991.

Looking at the challenges ahead, Ministers declared "we agree to take the lead in the transition to a green economy and to make a substantive contribution to the discussions on green economy within the context of sustainable development and poverty alleviation at the United Nations Conference on Sustainable Development to take place in Rio de Janeiro from 4 to 6 June 2012 (Rio+20)."

In this context, they "stressed the need to strengthen efforts, including through cooperation with the private sector, for the transition to a green economy by supporting the decoupling of economic growth from environmental degradation." To achieve this, they "recognized that energy efficiency is one of the most cost-effective ways to address climate change and move to a green economy. Investments and policy reforms to promote energy efficiency are particularly effective for this transition" and "environmentally harmful subsidies are obstacles for greener economies and investments in sustainable policies."

Among the concrete outcomes of the Conference, were:

In his address, the Head of the United States delegation stated that "this EfE Conference should be a model for the upcoming Rio + 20 Conference, with its focused agenda and declaration." He added: "we note, in particular, the emphasis on providing a strong scientific foundation to our deliberations and follow –up and the proactive involvement of civil society, and the private sector."

Karim Massimov, Prime Minister of Kazakhstan, addressed Heads of Delegations on 23 September, stressing his country's commitment to moving towards a green economy as well as the crucial need for "innovation, but also cooperation" to preserve the environment.

In his address, UNECE Executive Secretary, Ján Kubiš said that the Conference bears the fruits of the reform of the EfE process adopted in 2009 since it was "more focused, more pragmatic and more interactive". He insisted on the importance of the "close work with civil society" within the process and concluded by stressing that the discussions "will guide us in the preparations for the Rio+20 Conference on Sustainable Development."

The Committee on Environmental Policy will convene in 2013 a mid-term review to assess progress of the implementation of the outcomes of the EfE Conferences.

For the first time, the Astana Conference was a paperless conference.