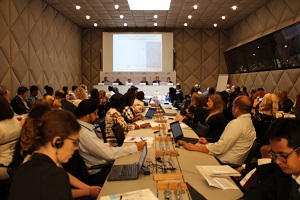 Countries around the world are moving towards seamless global supply chains. This is one of the key preliminary findings of the Joint United Nations Regional Commission (UNRCs) Survey on Trade Facilitation and Paperless Trade, presented on Wednesday 12 July, at the World Trade Organization (WTO) Aid4Trade Global Review 2017.

The survey, covering 120 countries across the globe, shows a significant increase in the global average implementation rate of trade facilitation and paperless trade measures in 2017, which stands at 61% compared to a 53% average rate in 2015. Developed economies have the highest implementation rate (82%), while Pacific Islands have the lowest (29%). Among developing economies, countries from Latin America and the Caribbean, East Asia and the Middle East and North Africa achieve high implementation rates at or over 60%.

According to the survey, the measures included in the WTO Trade Facilitation Agreement (which entered into force in February 2017), have been generally well implemented by countries surveyed, with an implementation rate ranging from 63% to 74%. However, substantial work is required to fully implement many of them, especially those related to cross-border paperless trade (e.g. electronic single windows, electronic exchange of certificates), and to customize trade facilitation measures for SMEs and women, which are not included in the Agreement.

Emphasizing the importance of collaboration among the UNRCs, UNECE Deputy Executive Secretary Andrey Vasilyev said “the results of this joint survey enable countries to better understand progress made in these areas, and provide a basis for evidence-based policy making to support the effective use of trade as an important means of implementation of the Sustainable Development Goals.”

In the UNECE region, the average implementation rate is higher than the global rate, reaching 69%, marking a 7% increase since 2015. The survey for the region, covering a total of 36 member States, shows improvement in all different categories of measures and confirms that, in general, more advanced or larger economies display higher levels of trade facilitation implementation than transition and land-locked economies, particularly in Central Asia.

The Former Yugoslav Republic of Macedonia was noted by the Chief of the UNECE Trade Facilitation Section, Maria Ceccarelli, as a case of a “low-income country that thanks to effective support and extensive reform efforts is performing very well”, as confirmed by the World Bank Doing Business report ranking.

The results of the Survey reinforce the evidence of a strong relationship between the increase in implementation of trade facilitation and paperless trade measures and the reduction in trade costs.

The full UNRCs global report and the regional reports, including detailed data analysis, will be published later this year.

Details of the event at the WTO Aid4Trade Global Review 2017, including presentations, are available at: http://www.unece.org/index.php?id=46179#/