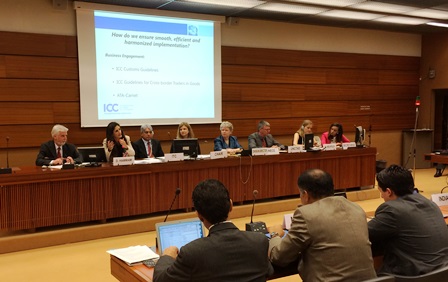 Private Sector representatives at the Global Facilitation Partnership meeting in Geneva last week stressed their willingness to support international organizations in assisting countries implement the recently concluded World Trade Organizations Trade Facilitation Agreement.  Speaking on behalf of the world business organisation, the International Chamber of Commerce (ICC), Donia Hammami said: “Rapid implementation of the Trade Facilitation Agreement is a key strategic priority for the international business community. ICC looks forward to work closely with the UN and other international organizations to support implementation. There needs to be a meaningful dialogue with the private sector at a national level to understand how trade facilitation reforms can boost national competitiveness.”

Gordon Wright, senior manager with the International Air Transport Association also emphasised this point and said “IATA strongly supports the WTO Trade Facilitation Agreement and its implementation, specifically those provisions focused on automation, smart borders and supply chain security. IATA is ready and willing to contribute to assisting LDC’s and developing countries in their TFA endeavours prior to and after ratification”.

“The potential benefits of this agreement are enormous and can be as much as USD 1 Trillion annually” said Sean Doherty of the World Economic Forum. “It is, therefore, in the direct interest of the business community to work together with the international organizations to help countries implement the agreement as fully and as speedily as possible” he said.

“UNECE stands ready to support the governments and the private sector to implement the WTO Trade Facilitation Agreement through its global recommendations, standards and tools to help countries cut red tape, automate trade transaction processes, and harmonize regulations across countries and regions’, said Tom Butterly, Deputy Director of the Economic Cooperation and Trade Division of the UNECE. “In particular, our Recommendations and Guides for establishing National Trade Facilitation Bodies (NTFB) and our Trade Facilitation Implementation Guide (TFIG) are highly useful for countries in the early stages of implementation of the Agreement”, he said.

Over 150 representatives of governments, private sector, international organizations and experts across the globe participated in the meeting which took place at the Palais des Nations in Geneva on 22 April 2015. The meeting, which focussed on ‘The Role of Private Sector in Supporting the Implementation of the WTO Trade Facilitation Agreement’ was co-organized by UNECE, the UN Conference on Trade and Development (UNCTAD) and the International Trade Centre (ITC) in collaboration with a number of other core GFP partners including The World Bank, the UN Industrial Development Organization (UNIDO), the World Customs Organization (WCO), and the International Chamber of Commerce (ICC).

Speakers at the meeting urged greater collaboration in the global efforts towards implementation of the Agreement and called on all stakeholders to participate fully in trade facilitation policy reforms, for the benefit of all countries. The outcome statement by the GFP members is available at http://www.unece.org/gfp2015.