Informal settlements are a significant problem for Kyrgyzstan’s capital Bishkek. According to the estimates shared by the city government, between eighteen and twenty-five percent of almost one million inhabitants of the city live in the forty-seven informal settlements around Bishkek. These settlements often lack basic communal services, such as water, electricity, gas and sanitation systems. Based on government assessment, they also lack basic infrastructure, such as schools, kindergartens, roads, and shopping areas.

The objective set by the city government of Bishkek is to transform them into liveable city areas. But there are several obstacles in solving this problem. For example, it is complicated to establish the ownership for some of the land in the settlements due to lack of historic records. Another struggle the city faces is the lack of financing. Funding available from the national and city governments is not enough to improve basic services and infrastructure. Additional and innovative forms of investments will therefore be needed, along with an integrated approach to improving living conditions in these areas. 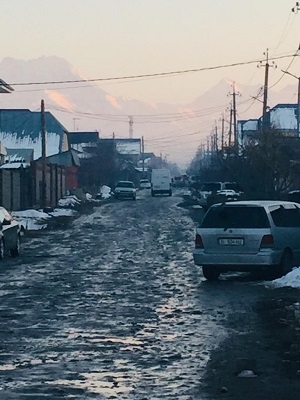 In response to these challenges, UNECE recently met with the Vice Mayor of Bishkek, Almaz Baketayev, who requested support in resolving issues with informal settlements, urban transport and infrastructure. The Secretary to the UNECE Committee on Urban Development, Housing and Land Management, Ms. Gulnara Roll, outlined that UNECE has recently issued the Guidelines for the formalization of informal constructions, which could form the basis for the city’s efforts. She also highlighted UNECE’s integrated “nexus” approach to support sustainable urban development matters. This cross-cutting approach leverages UNECE’s expertise in areas including transport, air quality, affordable housing, land management, energy, water, population ageing and other key topics for city development.

The representatives of the City of Bishkek and UNECE have also agreed to use UNECE’s Approach “Sustainable Smart Cities with Innovative Financing”. Within this approach, UNECE will develop a City Profile for Bishkek, using the U4SSC Key Performance Indicator (KPI) Evaluation Methodology. The Profile will cover the UNECE assessment of the City as Sustainable and Smart and will provide a list of targeted recommendations for further action. Based on these recommendations, UNECE will support the city to develop its action plan, consisting of two parts: improving legislation and creating a list of investable projects.

These activities are a part of the 12th UNDA Tranche project “Smart Sustainable Cities for the 2030 Agenda on Sustainable Development and the New Urban Agenda in the UNECE Region”.