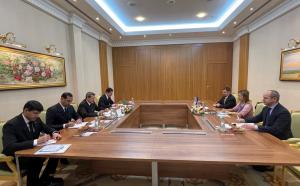 During her recent two-day visit to Turkmenistan UNECE Executive Secretary Olga Algayerova spoke at international conference “Dialogue is a Guarantee of Peace” in Ashgabat and discussed areas of cooperation with the highest government officials, focusing on future circular, digital and green sustainable development in the UNECE region.

Ms. Algayerova encouraged Turkmenistan to join forces with UNECE on the implementation of the Water Convention and recalled that the country is yet to accede to the Convention on the Transboundary Effects of Industrial Accidents. UNECE is currently working with several national agencies to prepare the ground for Turkmenistan’s accession to the latter convention.

Turkmenistan became party to the Aarhus Convention in 1999 but has not acceded to the amendment on genetically modified organisms or to the Protocol on Pollutant Release and Transfer Registers. Nevertheless, the Aarhus Centre in Ashgabat established by the Organization for Security and Cooperation in Europe (OSCE) remains a crucial capacity-building partner in the promotion of this convention and its protocol in the country.

As for transport, UNECE is currently implementing two projects with Turkmenistan: The Euro-Asian Transport Links Project (EATL) and the Sustainable mobility and smart connectivity in Central Asia. Ms. Algayerova commended Turkmenistan’s accession to 15 UN legal instruments on inland transport and called on the government to accede to the remaining ones.

Having just become a candidate for membership in the World Trade Organization (WTO), Turkmenistan will undergo an assessment of readiness to implement the WTO Trade Facilitation Agreement, and to support digitalization of trade and circular economy. To that end, UNECE will provide the necessary support to relevant national agencies.

Regional cooperation, including through SPECA, has significant potential to help solve the key problems that the UNECE region is facing. Turkmenistan is a strong supporter of the programme. It chaired SPECA and hosted the annual events in 2019 when the Governing Council approved the Ashgabat Initiative on Reducing Barriers to Trade and Transport. Ms. Algeyerova encouraged all the SPECA countries, including Turkmenistan, to support the programme financially and through substantive work.

Finally, the UNECE Executive Secretary called on Turkmenistan to include youth delegates in its delegations to the 70th Commission session in April next year in order to engage young people more deliberately in UNECE’s work. The session’s theme will be “Digital and green transformations for sustainable development”.