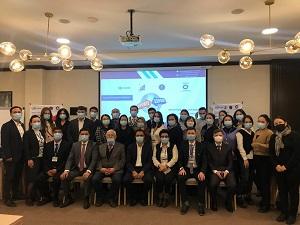 The training was delivered to over 40 participants from the public and private sectors, universities and NGOs, during the second international seminar on trade facilitation held in Bishkek, Kyrgyzstan on 1-2 December. Two modules on the Facilitation of import and export procedures and Single window implementation were developed by experts of the Centre of Competence for Trade Facilitation of KEU under the guidance of international experts and UNECE.

This course is pioneering trade facilitation education in the Kyrgyz Republic and brings international recommendations, standards, case studies and local practices to the participants. The instruments used include reference materials from international organizations, in particular those from the United Nations Centre for Trade Facilitation and Electronic Business (UN/CEFACT), such as Recommendation 33 on Single Window Development and the recently published Recommendation 38 on Trade Information Portals.

Mr. Almaz Kadyraliev, Rector of KEU, thanked UNECE for its support to KEU in strengthening the capacity of local experts. “I hope that continuous engagement between UNECE, the government of Kyrgyzstan and KEU will make the Competence Centre for Trade Facilitation a leader and knowledge hub in Central Asia”.

According to the UN Global Survey on Digital and Sustainable Trade Facilitation 2021, Kyrgyzstan’s trade facilitation implementation reached about 70 percent in 2021. However, the country is undertaking a host of further policy actions to improve its performance especially in digital trade facilitation. The policies and prioritized actions planned and implemented by the country are outlined in the National Trade Facilitation Roadmap. Support to KEU is one of the priority actions. More activities including the development of new modules and a third seminar are planned in 2022 under the grant.