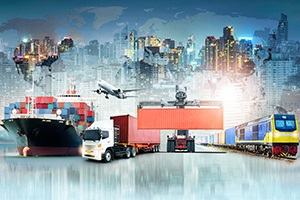 The transport costs of the world`s 32 Landlocked Developing Countries (LLDCs) are on average 50% higher than developing countries that have access to the open sea. If containerized imports are considered, LLDCs have costs that are 85% higher than the world average. As a result, LLDC exports are less competitive and the average LLDC has only 60% of the trade volume of the average coastal country.

This was recognized by Governments in 2014 when adopting the Vienna Programme of Action for LLDCs (VPoA) which stresses the need to promote harmonization, simplification and standardization of rules and documentation, including the full and effective implementation of international conventions on transport and transit. The UNECE-administered TIR Convention is a key legal instrument to achieve this - it establishes and regulates the only existing and operational global customs transit system, reducing transport times by up to 80% and costs by up to 38%.

With this in mind, UNECE, UN-OHRLLS, World Customs Organization (WCO) and International Road Transport Union (IRU) joined forces to organize a designated side event on “Modernization of the transit process – opportunities offered by TIR” held in the margins of the High-level Midterm Review Meeting of the Vienna Programme of Action for LLDCs.

The TIR Convention has a broad geographic coverage with 76 Contracting Parties, including the European Union. There are currently 34,000 authorized TIR carnet holders that use the transit regime quickly and reliably move goods across international borders, resulting in over 1 million TIR transports being carried out annually (figure for 2019).

Mr. Konstantinos Alexopoulos, TIR Secretary at the UNECE, said: “The TIR Convention is really at the heart of the Vienna Programme of Action which among other priorities emphasises the importance of freedom of transit and transit facilities”.  He added “The Convention applies to transports with road vehicles, combinations of vehicles as well as containers which allows for the use of the TIR Carnet across all modes of transport, including railways, inland waterways and maritime transport provided that at least one leg of the journey is made by road.”

According to an IRU study for selected countries in the Asia-Pacific region, the benefits of implementing the TIR Convention range between 0.14 and 1.31 per cent of national GDP – a figure which could be significantly higher for LLDCs.

Convinced that computerization and digitalization of transport documents brings considerable time, cost and efficiency gains, the 76 TIR Contracting Parties, out of which many are LLDC or transit developing countries, have been implementing, since 2017, a series of eTIR pilot projects, such as between the Islamic Republic of Iran and Turkey, and Georgia and Turkey. Other eTIR projects are currently under development, such as the eTIR intermodal project between Azerbaijan, Georgia, Kazakhstan and Ukraine or the eTIR project between Azerbaijan and Islamic Republic of Iran.

Mr. Nijat Mikayilov from the Ministry of Transport, Communications and Advanced Technologies of Azerbaijan said “The eTIR pilots mark a new era of transit operations and clearly demonstrate that the new paperless digital TIR works efficiently in a real transit environment”. He added: “These new digital TIR corridors enable larger, faster and more efficiently processed trade and transport flows and have the potential to boost economic development for many LLDCs in our region.”

In October 2019, based on the positive experiences of the countries involved in the eTIR pilots, the TIR Administrative Committee agreed to a set of amendments – for formal adoption in February 2020 – to be introduced in the TIR Convention, providing the legal basis for the TIR system to operate fully electronically. The so-called eTIR procedure will open new applications for the TIR system, in particular in the area of intermodal transport, for which the current paper procedure has proved cumbersome. This long-awaited revolution of the TIR system will not only provide a facilitated procedure for transport companies but will also further secure the TIR system for the benefit of all customs administrations using it.

The additional efficiency gains enabled through the fully computerized eTIR procedure could convince countries which have not yet ratified the TIR Convention to do so, in particular for LLDCs and in parts of the world were complex border crossing procedures still jeopardize international trade and, ultimately, economic development.