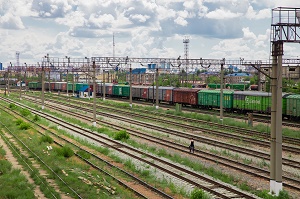 Landlocked developing countries (LLDCs) face many complex challenges. Due to their geographic remoteness, their lack of direct access to the open sea and the high transport and transit costs they face, they are at a significant economic disadvantage compared to the rest of the world. The Euro-Asian region hosts about 1/3 of the world’s landlocked countries, including some of the largest landlocked countries as well as some of those furthest from the open sea. Of the Euro-Asian LLDCs, the majority (Armenia, Azerbaijan, Kazakhstan, Kyrgyzstan, the Republic of Moldova, Tajikistan, Turkmenistan, the Former Yugoslav Republic of Macedonia and Uzbekistan) are UNECE countries, with only Afghanistan, Bhutan, Lao PDR, Mongolia and Nepal outside the UNECE region.

Responding to the challenges faced by these countries, senior government officials and experts from LLDCs, transit developing countries and regional and sub-regional organizations in the Euro-Asian region gathered this week for a Euro-Asian Mid-term Review meeting of the Vienna Programme of Action (VPoA), identifying progress and challenges in its implementation in the region.

The two-day meeting, jointly organized by the office of the High-Representative for Least Developed Countries, Landlocked Developing Countries and Small Islands developing States (UN‐OHRLLS), the United Nations Economic Commission for Europe (UNECE) and the United Nations Economic and Social Commission for Asia and the Pacific (ESCAP), took stock of the implementation of the VPoA in the Euro-Asian region, identified and shared best practices and innovative approaches to accelerate the implementation of the VPoA and adopted an outcome document highlighting recommendations to overcome the challenges faced by the Euro-Asian LLDCs.

In this context, transport is of particular importance for landlocked developing countries, emphasized UNECE Executive Secretary Olga Algayerova. “At UNECE we work closely with LLDCs in the Euro-Asian region to support their integration into the global economy, through practical tools such as the TIR Convention – enabling the reduction of cross-border transport time for goods by up to 80% and costs by up to 38% – and projects to strengthen Euro Asian transport connectivity, which have helped prioritize over 300 infrastructure investment initiatives”, she said.

This last example was achieved through one of UNECE’s flagship initiatives helping to improve transport connectivity in the region: The Euro-Asian Transport Links project. This project has made Euro-Asian transport a reality, gathering public and private sector stakeholders from over 38 countries in Europe and Asia, including not only many EU member States but also landlocked countries in Central Asia and the South Caucasus as well as non-UNECE countries in Asia.

“While the trade area has made progress in terms of agreements signed, it is the ratification of other relevant international conventions by both LLDCs and the transit countries that has been relatively low over the review period”, said the High-Representative and Under-Secretary-General for OHRLLS, Ms. Fekita ‘Utoikamanu. “To illustrate the challenge: in terms of international trade, the LLDCs continue to account for less than 1% of global merchandise trade. Exports remain concentrated around a few commodities, with low value addition and low technology content. This is troubling but above all it is cause for ACTION. We must work to reduce the high trade costs. Overcoming this obstacle remains fundamental to integrating LLDCs into global trade”, she added.

Participants in the Euro-Asian meeting adopted an outcome document highlighting the importance of strengthening regional and sub-regional cooperation on fundamental transit policies and accession to key international legal instruments; upgrading and maintaining existing road, rail, and information and communications technology (ICT) networks with the support of development partners, multilateral financial and development institutions, regional banks and organizations such as UNECE, ESCAP, UN-OHRLLS and ITU.

“Many LLDCs in the region have strengthened their efforts to support the soft infrastructure required to facilitate trade - and attract the investment, finance, technology and services needed to improve productive capacity. All these efforts should contribute to strengthening LLDCs’ connectivity and integration into the region’s economy,” said Executive Secretary of ESCAP, Ms Armida Salsiah Alisjahbana. “However, there remains great potential to deepen this integration by harmonizing policies to improve transit connectivity and support the creation of regional markets,” emphasized Ms. Alisjahbana.

The meeting is the first of the three regional meetings scheduled to take place in the lead up to the upcoming Midterm Review in December.