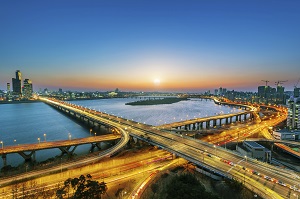 As transport technology progresses at breath-taking speed we tend to focus on how advanced and intelligent vehicles are getting.  However, of equal importance is the infrastructure that they travel on and where new technology can be used to make these roads more secure, safe, efficient and environmentally sound to support the achievement of the Sustainable Development Goals.

This is the subject that UNECE is now focusing on as part of the responsibilities of the Working Party on Road Transport (SC.1).  SC.1 works on the development and facilitation of international transport by road of both passengers and goods, helping to create simple harmonized transport rules and requirements.  The harmonization of intelligent infrastructure is a natural subject for these responsibilities, but has not yet received enough attention.  That changed this week when SC.1 held a special session which explored current practices, trends and perspectives in smart road infrastructure.

Smart road infrastructure can involve a number of factors, from using technology for better monitoring of movement, controlling traffic flow, updating travellers, or even communicating directly with cars to warn of a speed limit change.  It is as essential a part of the future of transport as smarter vehicles.

“Innovative new technology in transport is revolutionizing mobility, changing how people move, communicate, and pay for transport services, as well as how transport legislation is evolving,” said Mr. Yuwei Li, Director of UNECE’s Sustainable Transport Division, who emphasized the strong links with the work of SC.1.  “As countries make individual advancements in smart infrastructure, the technology may not be compatible with other countries in the region making international road travel more complicated, and also denying neighbouring countries of the chance to make greater advancements by moving forward together.”

Innovation in smart road infrastructure: a world of perspectives

A number of presentations highlighted new or ongoing projects focusing on using emerging technology for road infrastructure.  One of these focused on a project called Traffic Management as a Service from the City of Ghent, Belgium, co-financed by the European Regional and Development Fund through the Urban Innovative Actions Initiative. The project seeks to transform urban traffic control centres from giant immovable buildings which are difficult to update, into virtual traffic management services that are smarter and more accessible to the public.  Mr. Pieter Morlion, Project Manager of the city’s Traffic Control Centre, explained that virtual traffic management based on a central cloud-platform was being developed.

The platform integrated with a number of existing systems that hold information on real-time traffic patterns.  Currently existing systems such as Tom-Tom and Google maps may be familiar to most drivers, but modern traffic control centres find it difficult to constantly monitor or include data from these systems.  This new system would integrate local and global information sources and monitor them for anomalies. The advantage is that authorities will be able to access the platform and manage traffic instantly.  Additionally, citizens will be able to register with the system and, by providing their commuting routes and times, will be able to receive text updates when they might encounter an obstacle.

“By organizing traffic management as an online service, cities and countries around the globe can benefit from traffic management functionality just by subscribing to this service, without prior investments or installations,” said Mr. Morlion.  “They get immediately access to mobility data for their area and the tools to converse directly with citizens. I strongly believe that this will make the gap smaller between countries that have been investing for years in traffic management and, for example, developing countries.”

Additional presentations included an address from the Julius Baer bank on how new technology, regulation and changing lifestyles are rerouting energy expenditures and reshaping industries. Two alternative future scenarios of evolution or revolution of today’s trends were suggested based on population growth, a rising Asian middle class, urbanisation, fuel economy and electric mobility, autonomous driving and the sharing economy.

Hellastron (Hellenic Association of Toll Road Network) gave examples from the Aegean Motorway SA to demonstrate the continuous improvement in road infrastructure and services being provided to users. These improvements included developing a virtual traffic management centre and a National User Information System.

The Ministry of Infrastructure and the Environment in the Netherlands shared how the country is embracing smart infrastructure with an emphasis on public/private partnerships and projects. The Federation Internationale de l'Automobile (FIA) provided insight into how their Smart Cities initiative came about.

The exploration of smart road infrastructure was also the chance to highlight the synergies between UNECE’s work on sustainable transport and housing and land management, as well as with initiatives undertaken by other UN organizations in this area, including the International Telecommunication Union.

SC.1 will include smart road infrastructure as a regular item on its agenda for future meetings so that all stakeholders may remain informed about emerging smart technologies for the planning of new, or upgrading of existing, road infrastructure.

The report and presentations from this workshop will be available at http://www.unece.org/trans/main/sc1/sc1.html