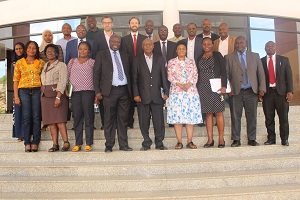 With a view to possible accession of Uganda to the Convention on the Protection and Use of Transboundary Watercourses and International Lakes (Water Convention), a national meeting was organized on 15 November in collaboration with the Ugandan Ministry of Water and Environment to increase awareness and understanding of the Convention with officials including those from Ministry of Foreign Affairs, Ministry of Justice, and Ministry of Energy and Mineral Development.

Held at the Ministry’s Kampala headquarters, the meeting aimed to contribute to the comprehensive understanding by Ugandan officials of the Water Convention, its provisions and obligations, its work on the ground, clarify misconceptions, as well as the benefits and possible challenges for Uganda to accede to it, in order to facilitate the country’s preparations for potential accession.

The Ministry of Water and Environment began by presenting the ‘Context of transboundary water resources in Uganda & current status of involvement with the Water Convention: setting the scene for potential accession’. The Republic of Uganda has been participating in transboundary water cooperation for over 50 years, including hosting the Nile Basin Initiative Secretariat in Entebbe since 2002 and hosting an annual training on international water law and governance since 2015 which the Water Convention partners on, with the most recent taking place from 11-14 November 2019 in Entebbe.

Having very recently ratified the Nile River’s Cooperative Framework Agreement and with 98% of the countries water resources located within the Nile Basin, it is clear why the Acting Permanent Secretary remarked in the meeting that for Uganda, “Water cooperation is not a choice, but a must”.

A representative from Ghana, Mrs Bernadette Adjei, provided national-level context by presenting the ‘Rationale of joining both global UN Water Conventions and overview of accession processes: The current experience of Ghana’. Ghana has initiated the accession processes for both of the United Nations global water conventions, namely: the 1992 Water Convention and the 1997 Convention on the Law of the Non-Navigational Uses of International Watercourses (Watercourses Convention).

The UN global water Conventions articulate the main principles of international water law and offer crucial legal frameworks that can support the formation of basin and bilateral treaties for water governance or strengthen those already in existence. Taken together, both Conventions are totally complementary and mutually reinforcing in both their content and practical implementation. Secretary-General of the UN, Mr Antonio Guterres, has encouraged countries to accede to and implement both Conventions and called on the UN system to support countries in acceding to and implementing them.

The meeting concluded with the Ministry of Foreign Affairs outlining Uganda’s accession process and officials subsequently setting out next steps that are involved for them to take.

The Agenda for the meeting and the presentations are available at the meeting page here: https://www.unece.org/index.php?id=53047