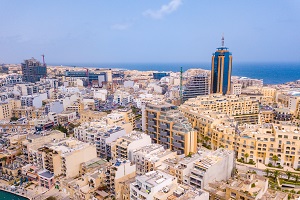 Out of the approximately 1.45 billion people living in the UNECE region, over 100 million spend more than 40% of their disposable income on housing. Moreover, at least 10 million people are on a waiting list for social housing and about 50 million live in informal settlements.

Like many other countries in the region, Malta has witnessed an accumulation of challenges related to housing affordability. On one hand, the country is experiencing rapid economic growth (real GDP increased by 4.9% in 2019 according to Eurostat) which has led to gentrification and the mass development of luxury houses and resorts. On the other hand, the tiny nation hosts thousands of migrants attempting to cross the Mediterranean. This has led to unprecedented disparity between the average household income levels and property prices.

To respond to these challenges, the Maltese Ministry of Social Accommodation stepped up its efforts to strengthen the national housing system. This new approach focusses on developing a housing sector that better promotes social and territorial cohesion for an overall better quality of life.

The Ministry’s efforts are in line with the UN Geneva Charter on Sustainable Housing and  the #Housing2030 initiative, which is promoted by UNECE in partnership with UN-HABITAT and Housing Europe. #Housing2030 provides a platform to address housing challenges through the exchange of experiences and expertise in favour of affordable, adequate and healthy housing for all.

In this context, experts discussed national housing systems in countries of the Mediterranean region, including Malta, drawing experiences and best practices from cities such as Paris, Barcelona, Vienna, Tunis and many others, at an international workshop on 17 September 2020.

Participants discussed ways to promote a societal shift away from the current perception of housing as capital to perceiving it as economic and social rights. This paradigm shift requires changes in urban policies and zoning, social mix policies, and more generally in the fabric of the built environment itself.

They will also enrich a study conducted by #Housing2030 on the impacts of the housing sector on climate change, social and territorial disparities and social and economic hardships amplified by the COVID-19 pandemic. The study should be discussed at the Eighty-first session of the UNECE Committee on Urban Development, Housing and Land Management in autumn 2021.