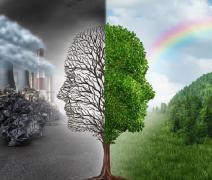 While COVID-19-related disruptions may have impacted people’s mobility and slowed cross-border movements of people and goods this year, pollution knows no travel restrictions. Air pollutants, travelling through our atmosphere, can harm people and the environment even thousands of kilometres from their point of emissions.

Air pollution has been dubbed the ‘invisible killer’, responsible for a staggering 7 million deaths per year, according to the World Health Organization – more than from Malaria, Tuberculosis and AIDS combined. As we find out more about COVID-19, some scientists also suggest that people who live in polluted areas might be more susceptible to develop severe symptoms.

During the COVID-19 related lockdowns in many cities around the world, researchers detected a sharp decline in air pollutant concentrations, specifically in levels of nitrogen oxides (NOx), due mainly to reduced road transport in urban areas. In some cities, such as Madrid, concentrations went down by more than 50 per cent from one week to the next. However, the quality of our air is determined by a variety of pollutants from different sources, some of which have been less affected by the pandemic, such as fine particles (PM2.5) from heating of residential and other buildings and the application of fertilizers in agriculture. This shows us that to effectively protect us from exposure to air pollution in cities, it is important to take comprehensive cross-sectoral measures that go beyond just the transport sector.

While our health is a major concern, especially in times of COVID-19, let’s not forget, though, that air pollution does not only take human lives – with an associated economic cost at or above 20% of national GDP in 10 countries of the Pan-European region – but that it can also wreak havoc on plants, animals and entire ecosystems.

On 7 September 2020, we celebrate the first International Day of Clean Air for Blue Skies – to raise awareness about air pollution and its devastating effects on human health and the environment and to call for renewed action to protect the very resource that we rely on with every breath – the air.

To be effective, this action must be taken at all levels, from the local and national scales, to – critically – the international levels.

In the UNECE region, countries realized that since we share one atmosphere, the problem of air pollution had to be tackled together. They therefore signed an international legally-binding contract back in 1979: the UNECE Convention on Long-range Transboundary Air Pollution (Air Convention). 40 years on, the Air Convention remains the only regional policy solution of its kind anywhere in the world. This regional approach is key precisely because air pollutants cross national borders and can travel thousands of kilometres.

Under the Convention, 51 countries in Europe – including all EU Member States – and North America are cooperating to reduce deadly air pollution. Its 8 protocols setting legally binding emission reduction commitments for various pollutants, its solid science-policy interface, its effective compliance mechanism, its capacity-building programme, and its outreach beyond the UNECE region make the Convention today more relevant than ever.

Collective efforts under the Convention have achieved impressive results:

But despite its successes, we still have a long way to go to protect our health and the environment from the effects of air pollution, within the UNECE region and around the world.

As we recover from the COVID-19 pandemic, we have a unique opportunity to build back sustainably, to reduce air pollution and protect the environment and our health through comprehensive cross-sectoral strategies.

UNECE will support countries in the region to fully harness this unique instrument and share its experience worldwide. I call on Governments and all stakeholders to join efforts for clean air!