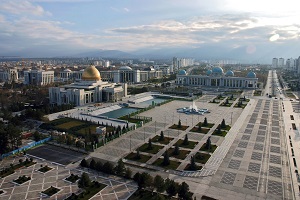 Now is the moment to transform Central Asia from a periphery of the large trading blocs in Europe and East Asia into a bustling hub of development and trade at the heart of Eurasia.

The Central Asian nations of Kazakhstan, Kyrgyzstan, Tajikistan, Turkmenistan and Uzbekistan, together with Afghanistan and Azerbaijan, have taken a decisive step to capitalize on this potential with the adoption of a new initiative to reduce barriers to trade and transport using UN legal instruments, standards and recommendations, significantly increasing interconnectivity in the region.

This will boost the regional market and cross-border supply chains, helping the countries to integrate with the economies of Europe and Asia. It aims in turn to attract investments, technologies and innovation to the region that has been a cradle of civilization, trade and transport routes since ancient times.

This comes as Ministers from the region gather under the United Nations Special Programme for the Economies of Central Asia (SPECA), seizing this opportunity to catalyze their progress on the 2030 Agenda for Sustainable Development.

Mr Batyr Bazarov, Minister of Finance and Economy of Turkmenistan, stated at the annual SPECA Forum on 20-21 November 2019 in Ashgabat: “our goal is to make the region a modern centre of transport services and trade”.

During the SPECA Days in Ashgabat from 18 to 21 November 2019, the SPECA working groups on trade and transport and the annual Economic Forum on Connectivity: Sustainable Transport and Trade Facilitation in the SPECA subregion finalized several documents that were later adopted by the SPECA Governing Council on 21 November 2019:

A very important element in the Initiative and the other concluding documents was the link between connectivity, trade and transport facilitation, and sustainable development. Trade facilitation is about cutting waste of material and human resources. A key challenge for the region is to make economic and trade growth sustainable.

The countries, represented at ministerial level, decided to establish a Fund to support the implementation of these strategic documents. Mr. Kire Ilioski, Director, Office of the Executive Secretary, UNECE, highly commended the decision of SPECA to evolve in the direction of a platform for policy dialogue and cooperation for the achievement of SDGs in the region. He conveyed the strong satisfaction of the UNECE Executive Secretary, Ms. Olga Algayerova, with the support of Turkmenistan for the idea of establishing a SPECA Fund for the development of the Programme.

SPECA is a country-owned and country-driven programme for the land-locked economies of Central Asia, supported by two United Nations Regional Commissions: the Economic Commission for Europe (UNECE) and the Economic and Social Commission for Asia and the Pacific (ESCAP). In this sense, SPECA plays a unique role as a bridge between Europe and East Asia. The adoption of the above decisions created a stable basis for the third stage of development of SPECA, at the nexus between trade, transport and sustainable development, launching the Programme into its third decade.

Mr. Peter Burian, EU Special Representative for Central Asia, noted that SPECA can serve as a platform for cooperation and successful regional projects not only among the SPECA countries but also among various regional groups and initiatives, such as the EU, CIS and ECO, all of which were represented in Ashgabat.

The SPECA countries picked up on the recommendations of the 2018 Evaluation Report of the Programme to focus each annual SPECA Economic Forum on a high priority topic, notably in 2019 the need for greater connectivity, and reduced barriers to trade and transport.

Mr. Hirohito Toda, Principal Officer, Office of the Executive Secretary, ESCAP, also noted the strong efforts for sustainable development being made in the subregion, with key areas for further progress being gender, decent work and strengthening the means of implementing Agenda 2030.