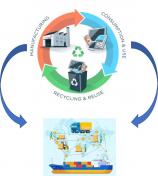 Recording of the event     News item

Background
The circular economy topic is emerging as a new economic paradigm in support of sustainable and resilient growth. In acknowledgement of its significance, UNECE member States determined circular economy and the sustainable use of natural resources as the cross-cutting theme oftheir high-level biannual gathering, the 69th Session of the Commission, scheduled for April 2021.

With several developed economies at the forefront of global policy developments, the objective of a gradual transition to a more circular economy is now also being embraced in other parts of the world. Still, despite encouraging policy progress, insufficient attention has been afforded to the circular economy pathways of transition economies. This session showcases examples of such progress in some of the UNECE’s 17 programme countries (Albania, Armenia, Azerbaijan, Belarus, Bosnia and Herzegovina, Croatia, Georgia, Kazakhstan, Kyrgyzstan, Republic of Moldova, Montenegro, Serbia, Tajikistan, Turkmenistan, North Macedonia, Ukraine, and Uzbekistan) in Central Asia, Southern Caucasus and the Western Balkans:

Considering such developments in the UNECE region and recognizing the importance of fostering an inclusive circular economy, this session will explore circular economy opportunities arising from value chains, trade and trade facilitation in transition economies. By bringing together representatives of four transition economies, the session will present an opportunity to exchange perspectives on the various angles of circularity.

Open discussion with the audience