Policy easing will likely support growth in the CIS, but downside risks are high

Against a backdrop of a challenging external environment, growth in the CIS is projected to pick up, while remaining stable in South-Eastern Europe, according to the United Nations World Economic Situation and Prospects (WESP) 2020, which was launched today.

The Report states that the global economy suffered its lowest growth in a decade, slipping to 2.3 per cent in 2019, as economic activity was impacted by prolonged trade disputes. The world, however, could see a slight uptick in growth in 2020 if risks are kept at bay.

While global growth of 2.5 per cent in 2020 is possible, the Report cautions that a flareup of trade tensions, financial turmoil, or an escalation of geopolitical tensions could derail a recovery. In a downside scenario, global growth would slow to just 1.8 per cent this year. A prolonged weakness in global economic activity may cause significant setbacks for sustainable development, including the goals to eradicate poverty and create decent jobs for all. At the same time, pervasive inequalities and the deepening climate crisis are fuelling growing discontent in many parts of the world.

UN Secretary-General António Guterres warned that “These risks could inflict severe and long-lasting damage on development prospects. They also threaten to encourage a further rise in inward-looking policies, at a point when global cooperation is paramount.” 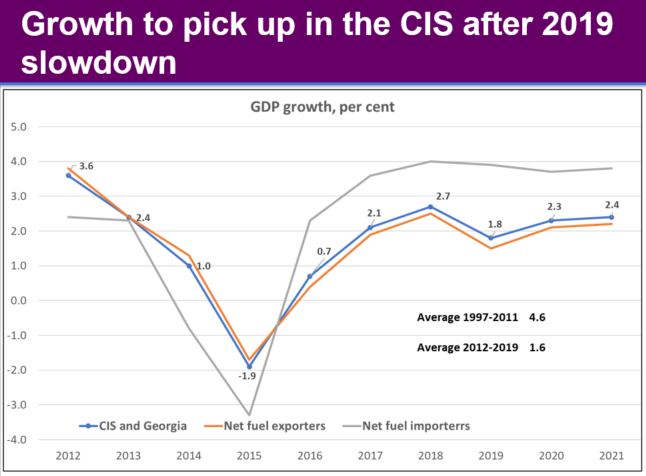 Policy easing in the Russian Federation should support stronger growth

Growth slowed in the CIS countries and Georgia in 2019, driven by a marked growth deceleration in the Russian Federation and weaker terms of trade. Average GDP growth for the region declined to 1.8 per cent in 2019 but is expected to increase modestly to 2.3 per cent in 2020 and 2.4 per cent in 2021. The economy of the Russian Federation is estimated to have expanded by just around 1 per cent in 2019, as a result of base effects and persistently weak consumer demand. Growth in oil output was curtailed by the production caps agreed with OPEC. Investment growth slowed in 2019, while export-oriented sectors outperformed those targeting the domestic market. Looking forward, increased fiscal spending in the Russian Federation in line with the implementation of national development projects and the impact of monetary easing should support stronger growth in 2020-2021. Among other energy exporters, Kazakhstan grew by an estimated 4 per cent, driven by strong domestic demand, as construction and services expanded rapidly.

Most of the energy-importing CIS countries enjoyed relatively solid growth in 2019. In Ukraine, household consumption was the key growth driver along with a strong harvest. Growth in Ukraine is expected to continue at around 3 per cent. However, the economy faces outward labour migration and worker shortages, while a possible volatility of gas transit fees may negatively affect the balance of payments. In Uzbekistan, strong industrial activity and a buoyant construction sector drove an acceleration of economic growth to around
6 per cent. For Belarus, the near-term outlook depends on the compensatory measures for more expensive oil imports. Strong growth is expected to continue in most countries in Central Asia; the implementation of the Belt and Road Initiative (BRI) should further support the development of energy and transport infrastructure. However, the funding of BRI projects may lead to rising debt burdens. Several CIS economies face large debt servicing costs over the period 2019-2021.

In most of the CIS, inflation softened in 2019 and monetary policy was loosened in several countries, including the Russian Federation. However, the rapid expansion of consumer lending, especially among the most vulnerable borrowers with higher payment-to-income ratios, has raised concerns. In terms of fiscal policy, hydrocarbon exporters are expected to embark on more pro-growth spending, while fiscal consolidation should continue in most energy-importing countries, in some of them related to IMF programs.

Growth slowed in the largest countries in South-Eastern Europe in 2019, due in part to base effects as well as weaker demand from main trading partners in the European Union. In the region’s largest economy, Serbia, employment gains and increased government spending should support growth of between 3 and 4 per cent over the forecast horizon. Similar growth rates are projected elsewhere in the region. Meanwhile, inflationary pressures remain contained, and monetary policies are accommodative. The region’s labour market situation remains difficult, despite progress achieved in recent years. High levels of unemployment, especially in Bosnia and Herzegovina, are compounded by large gender gaps and a shortage of skilled labour. Public debt remains elevated in most countries, though it has continued to decline as a result of fiscal consolidation, robust growth and improved financing conditions. The region still remains dependent on foreign financing. Average GDP in South-Eastern Europe is expected to grow by 3.4 per cent both in 2020 and in 2021.

Economic prospects of the CIS region are subject to a number of risks. A global slowdown would weaken commodity prices, affecting remittances to smaller countries, while exposing banking sector vulnerabilities. A further intensification of geopolitical tensions would dampen investment and reduce financing options. Although significant progress has been made towards greater economic diversification, the share of hydrocarbons in the region’s exports remains high, with a potential risk of stranded assets over the longer term. All CIS countries face challenges associated with the transition to “green” energy.

In South-Eastern Europe, economic prospects in the region are closely tied to developments in the European Union, its main trading and investment partner. Faltering economic performance in the latter remains a major risk factor. Depopulation in the region—especially outflows of youth and skilled workers—is impeding the shift towards higher-skilled industries. Increasing dependency ratios pose serious challenges to growth prospects and the ability to cover future pension needs.