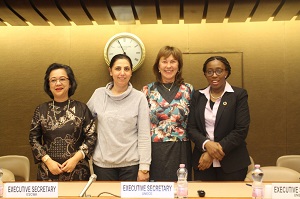 Those hoping to see increased cooperation between the public and private sectors to achieve the Sustainable Development Goals (SDG) were given a boost on Wednesday 7 May to 8 May when the Heads of the UN Regional Commissions decided to share a platform and give their support to new forms of Public-Private Partnerships (PPP).

Such models would make PPP a stronger tool to close the huge infrastructure gap that exists, especially amongst the low-and middle-income countries. The model being promoted is called ‘People-first’ and advocates a broader concept of PPP – not just ‘value for money’ but also ‘value for people‘– with five key outcomes: increased access and equity, replicability, sustainability and resilience, economic effectiveness and stakeholder engagement.

The coming together of the Executive Secretaries of the UN Regional Commissions took place during the 4th International PPP Forum “The Last Mile: Promoting People-first PPPs for the UN 2030 Agenda for Sustainable Development” hosted by the UNECE at the Palais des Nations in Geneva, in cooperation with the United Nations Economic Commission for Africa (ECA).

Speaking at the occasion, UNECE Executive Secretary Olga Algayerova strongly supported this new initiative of Regional Commission cooperation in the area of PPPs. She declared that People first PPP underline the basic premise that the private sector has to be mobilized behind the SDGs in new innovative ways. While UNECE is proud to have taken a lead in this area, she said, it was fully aware that Europe had much to learn from the other regions and the new models emerging elsewhere. She concluded by arguing that corruption has been one of the chief reasons for PPP having a bad name in Europe and hence that was the reason why UNECE had given priority to this problem in its  Standard on a Zero Tolerance Approach to Corruption in PPP Procurement.

The Executive Secretary of the Economic and Social Commission for Western Asia (ESCWA), Ms. Rola Dashti, mentioned the importance of bringing stakeholders into the partnerships and more shared ownership. She also stressed that historically, the absence of stakeholder engagement in PPPs was responsible for its bad name, because it can be seen by the population as a way for private companies to seize the national assets.

Ms. Vera Songwe, Executive Secretary of ECA argued strongly for the need to give more caution with respect to grants and fiscal suitability but scope in several sectors offer real hope for the future in renewable energy and also in broadband and IT. She said that ECA was supporting the other Regional Commissions to promote the PPP model and make it ‘fit for purpose’ for the 2030 Agenda for Sustainable Development.

Speaking earlier from Santiago, Chile, the representative from the Economic Commission for Latin America and the Caribbean (ECLAC) committed its full support to the People-first outcomes, especially on women’s empowerment which stresses the need for a greater role of women in decision taking in PPP projects, a stronger role for women in the design of projects and to women-led companies in the supply chain.

This cooperation also touched on the very important Belt and Road Initiative (BRI) and discussed real results emerging from projects along the Eurasian Corridor. Several presentations were made on the BRI projects that had taken place within the UNECE region and were evaluated according to the five People-first outcomes. A new innovative agenda was agreed including annual recognition for the best projects and an Impact Assessment Tool that would score projects against the SDGs and the People-first outcomes, and developed as a joint initiative by the Regional Commissions.

Additionally, the Forum was an opportunity to explore the full range of the People-first PPP outcomes and its feasibility for different sectors including those where UNECE has specific standards, namely the UNECE Standards on PPPs in Railways ,Roads and Renewable Energy. These standards will serve as guidelines for Governments to design and implement PPPs in those sectors that meets the SDGs and are people-first.

In the spirit of the newly agreed cooperation between the Regional Commissions, the next Forum is proposed to be held at ECA headquarters in Addis Ababa, Ethiopia, following a preparatory event that will take place in Kampala, Uganda.