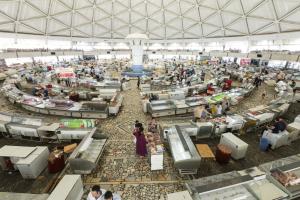 The COVID-19 pandemic and the war in Ukraine have disrupted global value chains and created new challenges for achieving the Sustainable Development Goals (SDGs) enshrined in the 2030 Agenda. This became particularly consequential for many economies in Central Asia, which have strong trade ties with the Russian Federation and limited access to international markets.

Reduced remittance inflows in 2022, traditionally accounting for a large source of income in Central Asian economies, have added to the troubles linked to global food and energy crises. The worsening global economic outlook has encouraged many Central Asian economies to diversify their trade links with the rest of the world. Accession to the World Trade Organization (WTO) has become a priority for several of these economies, which are still not part of the multilateral trading system: strong trade links can help increase stability in the case of external economic shocks. Accession to the WTO will also help attain targets of the UN SDG 17 aimed at promoting a universal, rules-based, open, non-discriminatory and equitable multilateral trading system under the WTO.

UNECE has a long history of cooperation with Central Asian economies. This work is done, inter alia, as part of the United Nations Special Programme for Economies of Central Asia (SPECA), launched in 1998, which is serviced jointly by UNECE and UNESCAP.

SPECA, Including Afghanistan, Azerbaijan, Kazakhstan, Kyrgyzstan, Tajikistan, Turkmenistan and Uzbekistan, aims to strengthen subregional cooperation in Central Asia and its integration into the world economy. Three of the seven SPECA participating countries are in the process of WTO accession. Most recently, the SPECA Working Group on Trade in August 2022 and the high-level SPECA meeting in the framework of the WTO Ministerial Conference in June 2022 reiterated the pledge to support Azerbaijan, Turkmenistan, and Uzbekistan on their way to WTO accession.

The importance that Central Asian countries attach to increasing trade, improving investment conditions and accelerating the green and digital transformation, including through regional economic cooperation, was recently emphasised in the documents agreed upon at the Samarkand Summit, hosted by Uzbekistan. Among others, the summit emphasised multilateral cooperation to mitigate climate change and facilitate an environment of innovation and entrepreneurship across the region.

Over the past year, UNECE has stepped up support to specific SPECA countries in their efforts to expand trade, including through WTO accession.

Uzbekistan, for example, recently reaffirmed its commitment to intensify accession efforts following successful meetings of its WTO Accession Working Party. In June 202,  the^ UNECE’s Steering Committee on Trade Capacity and Standards discussed progress trade reforms in the country, based on a UNECE study on Regulatory and Procedural Barriers to Trade. As recent reforms increase export opportunities for the country, particular attention needs to be given to ensuring that non-tariff measures during the pandemic do not become trade barriers. In addition, UNECE has provided capacity building regarding this country’s innovation ecosystem as the government seeks to implement recommendations from the UNECE Innovation for Sustainable Development Review (I4SDR) launched in 2022.

In the case of Turkmenistan, the country applied in November 2021 to become a member of the WTO. Subsequently, in March 2022, UNECE organised a national capacity-building seminar on WTO accession for Turkmenistan and contributed to the multi-stakeholder meeting organised by Turkmenistan on the occasion of the visit of the WTO Deputy Director-General in July 2022.

Turkmenistan has already played a role in fostering sustainable trade in Central Asia. In 2019, under its SPECA chairmanship, countries adopted the SPECA Principles of Sustainable Trade in Ashgabat. These principles, with a focus on diversification and innovation of production and trade, contribute to shaping sustainable and circular economy-focussed regional policies - an essential component of the overall trade reform relevant to WTO accession.

To more comprehensively support member States in their process of WTO accession, UNECE joined the recently launched WTO Coordination Group on Accession-related Technical Assistance. The secretariat also cooperates with the WTO Accession Division and WTO Chairs Programme. This reflects the increasing attention UNECE’s Economic Cooperation and Trade Division gives to issues relevant to WTO accessions, aligned with the overall objectives of harnessing the power of trade for sustainable development.

Along these lines, UNECE is pleased to host the session ‘Circular Economy and Trade: Opportunities and Challenges for Transition Economies’ at the upcoming WTO Public Forum, co-organised jointly with the Permanent Mission of the Republic of Uzbekistan to the UN Office and other international organizations in Geneva. The high-level session takes place on 30th September 2022 at 17:30 in the WTO. It seeks to contribute to mainstreaming the circularity agenda as a critical element for integration into the multilateral trading system.