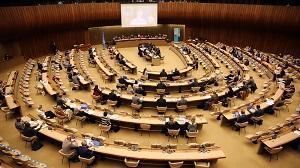 Can the oft-shared, yet increasingly scarce and most precious, resource that is water be a source of cooperation, rather than of conflict, among countries? If so, then how? As climate change brings prolonged droughts and more intense floods, how will Governments cope together? More than 20 ministers, deputy ministers and State-secretaries addressed these questions during the special session on water and peace of the High-level Segment of the ninth session of the Meeting of the Parties to the Convention on the Protection and Use of Transboundary Watercourses and International Lakes (Water Convention) on 29 September 2021.

As highlighted by Ms. Olga Algayerova, UNECE Executive Secretary: “If we continue with current practices, the world will face a 40 per cent shortfall between demand for water and available supply. We need to act now.” In addition, climate change brings more intense rainfall and flash flooding, as well as more intense droughts in many regions.

These destabilizing effects, combined with population pressures, economic growth, deterioration in water quality and environmental degradation, can exacerbate tensions over water and make water-stressed regions more prone to conflict. Mr. Serigne Mbaye Thiam, Minister for Water and Sanitation of Senegal, stated that: “The competition for water ... obliges us imperatively to opt for a common and concerted management, in particular in shared basins … It pushes us towards … international solidarity to avoid conflicts and ensure stability.”

Transboundary water cooperation is key for regional peace and stability

The successful joint management of water resources can transform a potential source of tension into a focus of positive regional cooperation, partnership and sustainable positive change. Experiences from various basins around the world, such as the Rhine, the Danube, the Senegal, the Gambia and the Iberian rivers, show that cooperation for the management of shared resources can generate numerous benefits and galvanize efforts towards peace.

Mr. Aleksandar Stijović, Minister for Agriculture, Forestry and Water Management of Montenegro, referring to the recent past of the Balkans region, noted that, in regions experiencing conflicts not related to water: “Close cooperation on water conservation can be a chance to improve and establish … good neighbourly relations and lasting peace.“

However, insufficient water cooperation can result in significant costs and major risks, and act as a potential source of national, transboundary or regional instability. That is why, in the words of President Kersti Kaljulaid of Estonia: “It is important to address the root causes of conflict related to water at [an] early stage.” Cooperation is a must in this regard.

The Water Convention has served as a model for transboundary water cooperation in the pan-European region for more than 20 years, and increasingly now in other regions since 2016. It acts as a catalyst for negotiating new, and strengthening existing, transboundary agreements and institutions, as well as for improving national water management and governance. The signature of the declaration on the Senegalo-Mauritanian Aquifer Basin by ministers of the Gambia, Guinea-Bissau, Mauritania and Senegal, on 29 September 2021 in Geneva, is a good example of the ability of the Convention to support countries in developing long-term cooperation frameworks in basins.

“The Water Convention sets principles to cooperate and to hold consultations, exchange information, conclude agreements, and establish joint bodies”, explained Mr. Jüri Ratas, President of the parliament of Estonia, detailing positive achievements it had facilitated for cooperation with the Russian Federation on Lake Peipsi. As highlighted by Ms. Florika Fink-Hooijer, Director-General, Directorate-General for Environment, European Commission: “The Water Convention is a vehicle to promote peace and, as a vehicle for peace, we are proud to support it.”

Accelerating progress on transboundary water cooperation is a priority

Mr. António Guterres, Secretary-General of the United Nations, in his message, lamented that progress towards achieving Sustainable Development Goal 6 on water is off-track. With only 24 out of the 153 countries sharing transboundary waters having all their transboundary waters covered by operational agreements, progress is urgently required to ensure that all countries sharing rivers, lakes and aquifers cooperate effectively. He called for “greater commitment, courage and solidarity to move forward together” and reaffirmed that “the 1992 Water Convention [was] a powerful tool to advance cooperation, prevent conflicts and build resilience”.