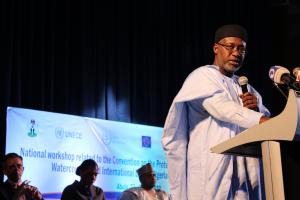 Nigeria has taken a significant step towards ensuring the sustainable management of its cross-border waters with a milestone commitment to join and implement a United Nations treaty known as the Water Convention.

This commitment, guided by a road map, will be the key outcome of the National Workshop taking place this week in Abuja (27-29 July) on the Convention on the Protection and Use of Transboundary Watercourses and International Lakes.

Nigeria’s Federal Minister of Water Resources, Engr. Suleiman H. Adamu, stated: “As the most populous country in Africa where the majority of our over 206 million people depend on water that we share with neighbouring countries, Nigeria attaches significant importance to transboundary water cooperation. Nigeria this week will commit to a road map for its accession to and future implementation of the United Nations Water Convention. The government of Nigeria encourages all nations with which it shares water resources to accede to the Water Convention and ensure its full implementation. This offers a crucial means for us to work together to strengthen the foundations for peace, stability and sustainable development in the Lake Chad and Niger basins, for the mutual benefit of our populations and natural environment.”

Transboundary water cooperation: a key issue for the Lake Chad and Niger basins

Nigeria shares at least one transboundary water body with each of its neighbouring states. The Lake Chad Basin is the largest inland drainage area in Africa and covers an area of 2,434,000 km2, equal to 8% of the total area of the African continent. The basin extends through Algeria, Cameroon, Niger, Nigeria, Central Africa Republic, Chad, and Sudan. In Nigeria, the basin drains about 20% of the country. Damming, overextraction, climate change, and drought are all contributing to the rapid depletion of Lake Chad, which has decreased in size by 90% over the last 60 years. This has led to significant unemployment and insecurity challenges in the region.

Nigeria is also home to about 80% of the 100 million people residing in the basin of the Niger river, which crosses Algeria, Benin, Burkina Faso, Cameroon, Cote d’Ivoire, Guinea, Mali, Niger, Nigeria and Chad before emptying through the Gulf Guinea into the Atlantic Ocean.

With these shared waters increasingly threatened by water scarcity linked to climate change, pollution, and rising demands on their use, “transboundary water cooperation is crucial for peace, conflict prevention, sustainable development and human well-being. This is particularly relevant in regions such as the Lake Chad and Niger basin where water is closely related to security, livelihoods and regional stability. As an effective global legal and intergovernmental framework and platform for cooperation and sustainable management of shared waters, including groundwaters, the Water Convention helps countries to address key challenges”, stressed Ms Sonja Koeppel, Secretary of the Water Convention.

Nigeria’s accession would help consolidate the fast-building momentum for water cooperation in Africa and, given its role as the largest economy in Africa and position in key shared basins, prove a catalyst for more countries to join and reap the benefits of implementing the Water Convention.

Chad, Senegal, Ghana, Guinea-Bissau and Togo have joined the Convention since 2018 following its opening to accession by all UN Member States. Cameroon is on the cusp of becoming a Party, following the President’s signature on accession earlier this month. More than 15 countries are in the process of joining, most of which are in Africa. Nigeria’s accession could be particularly crucial as, together with Cameroon, it would help reach a critical mass of Water Convention Parties in the region that share the same water resources.

Current water challenges in Nigeria are due to the rapidly increasing demand as a result of population growth, increased urbanization, increase in irrigation farming and industrialization. These challenges have been exacerbated by persistent drought and have resulted in greater dependence on groundwater resources. Nigeria also experiences perennial flooding, which can have multi-billion dollar consequences. Effective transboundary cooperation can help address these challenges. In this regard, Nigeria has signed several transboundary agreements over its shared water resources. Notably, Nigeria is party to the Lake Chad Basin Commission and the Niger Basin Authority.

Joining the United Nations Water Convention would support Nigeria to consolidate existing cooperation with its neighbouring states – both with Convention Parties like Chad, and those in the process of acceding to the Convention, such as Cameroon. Accession to the Convention could facilitate the entry into force and implementation of regional legal frameworks such as the Lake Chad Basin Water Charter.

Accession to the Water Convention would allow Nigeria to benefit from support at the global level to strengthen stability and peace, drawing on the Convention’s proven 30-year experience in facilitating cooperation in shared basins. It would also support Nigeria to further improve its integrated water resources management at the national level.

Nigeria also intends to raise the profile of transboundary water cooperation at the highest political level, in the perspective of the upcoming 2023 United Nations Water Conference.

UN Secretary-General António Guterres has called on all Member States to join the Convention and ensure its full implementation, stressing that “the 1992 Water Convention is a powerful tool to advance cooperation, prevent conflicts and build resilience”. Today, it has 46 Parties worldwide.

The Water Convention, whose secretariat is serviced by UNECE, is a unique and widely accepted intergovernmental legal framework. It requires Parties to prevent, control and reduce negative impacts on water quality and quantity across borders, to use shared waters in a reasonable and equitable way, and to ensure their sustainable management through cooperation. Parties bordering the same transboundary waters are obliged to cooperate by concluding specific agreements and establishing joint bodies.

With 153 countries sharing the cross-border rivers, lakes and groundwater reserves that make up more than 60% of the world's freshwater flow, the key role of water cooperation for peace and sustainable development is being increasingly recognised, including by the UN Security Council, in the African Ministers' Council on Water Strategy 2018-2030, and in the EU Council Conclusions on Water in EU External Action adopted in 2021. Having arrangements in place to cooperate on all shared waters is also among the 2030 targets of the Sustainable Development Goals, where, according to the latest data, only 24 countries are on track. Worldwide, some 3 billion people worldwide depend on water that is shared by 2 or more countries.