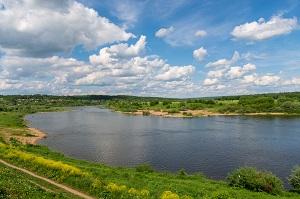 To address these challenges and achieve SDG 6 on water and sanitation for all, partnerships between governments, international and non-governmental organizations and the private sector are crucial. Water is a catalyst for economic development, regional integration, cooperation and peace rather than a conflict driver.

These were some of the conclusions of the conference Water and Beyond - EU transformative approaches for international partnerships organized from 18 to 21 January 2021 by DG INTPA and the Government of Slovenia, with the support of the Government of Portugal as the Presidency of the Council of the European Union. This event aimed at informing the EU Priorities for International Partnerships in the water sector and the new EU green Deal programming currently being developed.

UNECE, was one of the main co-organizers of the event together with UNESCO, WaterAid, Borda and Women for Water Partnership. More specifically, UNECE organized three thematic sessions, including a session on transboundary water cooperation to discuss water as a catalyst for cooperation that can foster trust and peace.

In her opening address, Ms. Olga Algayerova, UNECE Executive Secretary, recalled that “water agreements and joint institutions provide indispensable backbones for effective cooperation, enabling sharing of economic, social and environmental benefits”. Mr. Ben Ampomah, Executive Secretary of Water Resources Commission of Ghana, which acceded to the Water Convention in June 2020, highlighted that “the Water Convention’s globalization offers a unique opportunity to accelerate progress worldwide, and address some of the root challenges to transboundary cooperation. Accessions support development at national and transboundary levels by providing an enabling environment for investments and supporting water governance.”

The recognition of the key role played by the Water Convention to support countries in enhancing cooperation on their shared waters was also stressed by H.E Mr. Stanislav Raščan, Minister of Development of Slovenia and H.E Mr. Janez Lenarcic, Commissioner for Crisis Management, at the European Commission.

UNECE, together with WaterAid, also organized sessions on the needs to further mainstream water into climate change policies and to bridge the financial gap for SDG 6, two key topics also addressed by the Water Convention under its current programme of work 2019-2021. During the discussions, the important role played by transboundary basin organisations in facilitating climate change adaptation on the national level and in improving overall regional cooperation was underlined. Mr. Henk Ovink, Special Envoy for International Water Affairs for the Kingdom of the Netherlands. Hence there is a need to further integrate the benefits of transboundary water cooperation into national climate policies (e.g., Nationally Determined Contributions and National Adaptation Plans) as well as sectoral national policies.

Active discussion on the financing issue with the French Development Agency, the African Development Bank, the World Bank, the European Investment Bank, WaterAid and VEOLIA concluded that countries should take into account the various existing financial options such as tariffs, international and domestic funding, concessional finance and support countries to build stronger partnerships between public and private stakeholders to ensure tailored water investments. In this regard, the mobilization of financial resources for transboundary water cooperation processes at basin level was also discussed as crucial to create the enabling environment to ensure good water governance and therefore further attract investments in the water sector.

Finally, the conference emphasized the role that the European Union could play in enforcing human rights to safe drinking water and sanitation. A recent major step forward in this direction is the entry into force of the revised Drinking Water Directive which in its article 16 specifies a requirement to take the “necessary measures to improve or maintain access to water intended for human consumption for all, in particular for vulnerable and marginalised groups”. It was highlighted that in implementing this requirement, countries may benefit from the UNECE-WHO Regional Office for Europe Protocol on Water and Health which provides a practical methodology to assess the baseline of equity and define policy and technical measures to improve access, ultimately leading to progressive realization of the human rights.