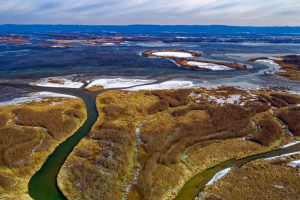 The use of material resources, fuelled by economic and population growth, urbanisation and societal changes, has increased more than ten times since 1900 and is set to double again by 2030. The annual global extraction of materials has increased from 27 to 92 billion tonnes since 1970, while the world's population more than doubled, and global CO2 emissions rose by about 90 per cent.

As a result, pressure on natural resources, most of which are not renewable, continues to grow, bringing negative impacts in terms of pollution, ecosystem degradation, biodiversity loss, and climate change.

The complex policy issues and difficult choices regarding the management, conservation, and use of natural resources necessitate a comprehensive approach that can address the many interactions and trade-offs inherent between the Goals and targets of the 2030 Agenda for Sustainable Development.

To achieve this, a new UNECE report calls for adopting a "nexus" approach to identify and promote integrated planning, management, and governance of natural resources, across sectors and spatial scales.

To support this approach, the report "Natural Resource Nexuses in the UNECE region" – which stretches from North America to Europe, the Balkans, the Caucasus and Central Asia – reviews the situation, trends, challenges, and main interactions for five natural resources:

An estimated 1.8 per cent of the total population in the region (or 16.5 million people) are exposed to a severe form of food insecurity. In comparison, 11 per cent (affecting more than 100 million people) may be exposed to moderate food insecurity. Resource use by agriculture varies significantly across the region - for example. In contrast, in 2014, agriculture used 66 per cent of the total water used in Europe. In the Mediterranean region, this share was around 80 per cent. Food waste is also a critical issue, accounting for 88 million tonnes annually in the EU, primarily households and processing.

Agriculture (croplands and pastures) accounts for less than 30 per cent of land use in the region. Forest area has been increasing, comprising multiple resources including land, water, materials, and energy, exposed to a wide range of often conflicting demands from industries and society. Land use interacts with all other natural resources: watershed management is a significant land use planning objective. Land use policy determines the availability of energy and material sources, whether from renewable or non-renewable sources. Biodiversity is also strongly influenced by land-use decisions.

While the region is rich in freshwater, there are high-water stress areas, such as Central Asia, the Mediterranean and the Western United States. Fresh surface water use in the region has stabilised. Since 2011, water withdrawal in the region shows a downward trend, supported by careful water use by agriculture in some areas and integrated water resource management. Groundwater is the source of a much larger freshwater volume than surface water and is increasingly essential for many countries' water security. Transboundary cooperation is crucial for water management in the region.

The report then identifies seven Hotspots that showcase significant challenges and opportunities in the region.

Preventing and reducing food loss and waste along the entire food value chain is key to improving food security, the sustainability of food systems, and addressing environmental challenges. This can only be addressed through a multisectoral approach. UNECE contributes to addressing this challenge through constantly adapted quality standards for the safe and transparent trade of food and agricultural produce; a dedicated measurement methodology, and an international Code of Good practice to avoid food loss, a handling guide for entire supply chains.

Together with other UN agencies and the private sector, UNECE has developed FeedUp@UN, a new interactive trade and data measurement food loss management system supported by blockchain. Policy recommendations to assist governments in their transition to meaningful food loss and waste policies and circular economy approaches are under development.

Motor vehicles use large volumes of natural resources at every stage of their life cycle. This can be reduced by adopting a life cycle analysis. This was the approach followed in UN Regulation No. 133, which sets minimum rates for reusability, recyclability and recoverability. According to this regulation, 85 per cent of the vehicle mass should be reusable/recyclable and 95 per cent reusable/recoverable. These rules have a significant influence on vehicle design in over 50 countries.

Design is also essential to prevent the programmed obsolescence of vehicles and extend their life. A new UN Regulation on Software Updates entered into force in January 2021 to facilitate vehicle upgrades that will limit vehicles' premature obsolescence.

The value attached to land reflects how the public utilises it to generate social and economic benefits and social priorities and resolve competing demands. Land value capture is a policy approach that can be used to increase the value of urbanisation to support public investments. It is a process by which increasing land prices, generated through urban infrastructure and services, finance these developments.

UNECE has called attention to land value capture in the provision of affordable housing through its action plan for energy-efficient housing adopted in 2010. UNECE's work on energy-efficient housing, smart cities, and land management addresses many of the intersectoral challenges and opportunities facing the housing sector, notably the transition towards a carbon-neutral and circular economy. UNECE has also taken up land value capture as an innovative approach to finance transport infrastructure.

Natural Resource Use in Transboundary Basins

Natural resource management could be coordinated holistically at the river basin scale, which often spans several countries and impacts development across borders. Therefore, it is not possible to promote sustainable and integrated natural resources management without also addressing transboundary cooperation in many cases.

Through the Convention on the Protection and Use of Transboundary Watercourses and International Lakes (Water Convention), UNECE has developed a methodology to provide a participatory assessment of natural resource use and management issues in transboundary basins. The methodology is based on assessing the water-food-energy-ecosystems nexus to ensure that the interlinkages between components are fully taken into account to identify synergy opportunities and solutions to trade-offs. Such solutions can be applied in governance; economic and policy instruments; infrastructure (both grey and green); and innovation.

The System of Environmental-Economic Accounting (SEEA) provides a systematic way to measure and report on stocks and flows of natural capital. The underlying idea is that the environment should be recognised as an asset that is maintained and managed. Its contributions   should be integrated into commonly used frameworks, such as the System of National Accounts.

UNECE promotes the SEEA, together with OECD, and supports countries in its implementation. It is also actively engaged in addressing the lack of environmental data throughout the region, for example, through implementing the Shared Environmental Information System (SEIS) in Europe and Central Asia.

UNECE runs the Secretariat of the ECCA30 initiative, together with the IUCN, FAO, World Bank, and World Resources Institute. ECCA30 was launched in 2019 to bring 30 million ha of degraded and deforested land in Europe, the Caucasus and Central Asia into restoration and to accelerate efforts towards the global Bonn Challenge target of 350 million hectares by 2030. UNECE/FAO have also carried out studies providing the first overview of the state of forests and the potential to restore forests in the Caucasus and Central Asia and Eastern and South-Eastern Europe.

An integrated sustainable energy system can be described as a system that allows infrastructure and energy generation capacity to be used more efficiently. UNECE contributes to this objective through the United Nations Framework Classification for Resources (UNFC), which fully integrates social and environmental considerations in assessing energy and mineral projects. Under UNFC, new standards for the assessment of solar and wind energy resources have also been developed. UNECE is developing the United Nations Resource Management System (UNRMS) to provide comprehensive support to integrated resource management.

The report proposes a generic and scale-independent approach for identifying a nexus pathway developed by UNECE, which is largely based on experiences with water and energy-related nexus activities carried out in the region under the Water Convention. The nexus pathway approach allows – through a process anchored in a multi-stakeholder dialogue - to propose actions and measures based on identified nexus challenges and intersectoral linkages and an evaluation of how they have been addressed. Various UNECE tools can be applied in different stages.

UNECE stands ready to support its member States' efforts for integrated sustainable natural resource use through a nexus approach and make the most of UNECE tools to address the key hotspots identified.

The report is available in English at https://unece.org/sustainable-energy/publications/natural-resource-nexuses-ece-region-0 and in Russian at

UNECE supports countries to address some of the key sustainable development challenges facing the region, which can help steer efforts for a green and inclusive socio-economic recovery from the COVID-19 crisis.

At the crossroads of all UNECE programmes and expertise, UNECE has identified four high-impact "nexus" areas where multiple SDGs converge.

This report is one of four flagship publications prepared by UNECE to support countries' SDG progress in these key areas.