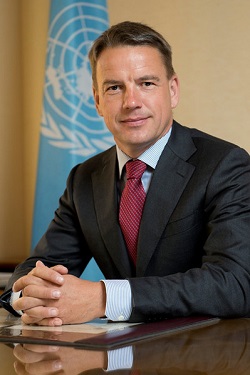 On 9 July 2014, the Secretary-General appointed Mr Christian Friis Bach of Denmark as the next Executive Secretary of UNECE.

Mr Bach brings to the position a combination of deep knowledge in international economy and development affairs coupled with innovative and results-oriented leadership.

Mr Bach came from a position as Member of the Danish Parliament and Head of the Parliamentarian Group for the Danish Social/Liberal Party. He previously served as Denmark’s Minister for Development Cooperation (2011-2013) and Special Advisor to the European Union Commission for the United Nations Global Sustainability Panel (2010-2011). He is Honorary Professor of International Economics and Development at the University of Copenhagen (2009-2014) and has been Associate Professor in International Economics and Development Economics, the Royal Veterinary and Agricultural University (1999-2005).

Mr Bach has a long history with civil society, notably as the International Director for the DanChurchAid (2005-2010) and as Chairman of the Danish Association for International Cooperation (1997-2001). He also has private sector experience from running a start-up company and has worked as a journalist at the Danish Broadcasting Corporation.

Mr Bach holds a Ph.D. in International Economics (1996), a MSc in Agronomy (1992) from the Royal Danish Agricultural University in Copenhagen and a supplementary degree in Journalism from the Danish School of Media and Journalism.

Born in 1966, Mr Bach is married and has three children. The family lives on a small farm outside of Copenhagen.