50th Anniversary of the 1968 Conventions 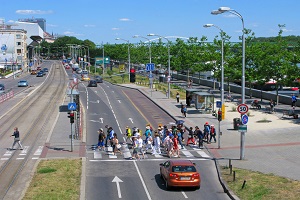 At the turn of their 50th anniversary, the Vienna Conventions on Road Traffic and on Road Signs and Signals from 1968 are more relevant than ever. Whether helping to address the most critical road safety needs, or facilitating the development of automated driving functionalities, reference to these legal texts, which are evolving with technological developments, is a necessity for countries around the world.

The two Conventions have a global scope and are important frameworks facilitating international road traffic through uniform traffic rules and harmonized road signs, signals, symbols and markings. With the increase in motor vehicles observed over the past decades and its expected rise in emerging economies –  contributing to the anticipated doubling of the number of cars on the roads worldwide by 2040 –  the principles of the Conventions are key to improving road safety standards around the world, particularly in low and medium-income countries, where 90% of road fatalities occur.

The application of these principles is a core component of the recommendations made by UNECE in its Road Safety Performance Reviews. In 2018, these Reviews have provided Albania, Cameroon, the Dominican Republic, Georgia, Uganda and Vietnam with key practical steps to improve their road safety situations.

In 2014, Vietnam acceded to both Conventions and subsequently amended its 2008 Road Traffic Law to bring it in line with both the needs of its situation and the international standards of the Conventions. This has contributed to reducing Vietnam’s road traffic fatalities from 15 per 100,000 people in 2007 to 9 in 2016.

Jean Todt, United Nations Secretary-General’s Special Envoy for Road Safety, stressed “With 1.25 million people still dying on the world’s roads every year, we need to combine our efforts to address this dire situation. We have one of the remedies, in the form of the United Nations Road Safety Conventions, which lifesaving impact remain the cornerstone of my recommendations for improving road safety to countries all over the world”.

UNECE Executive Secretary Olga Algayerova highlighted “As custodian of the 1968 Vienna Conventions and the other United Nations road safety legal instruments, UNECE is committed to leveraging the practical value of these tools to save lives on the roads, responding to the prioritization of road safety within the 2030 Agenda for Sustainable Development. An important dimension of this work is cooperation with other United Nations Regional Commissions and a broad range of road safety stakeholders, to both support countries’ accession to the Conventions and maximise their effective implementation where it counts – on the roads”.

“The United Nations Road Safety Conventions continue to develop in response to the most pressing challenges on the world’s roads – from addressing the most critical road safety situations in low income countries to ensuring the safe introduction of new mobility technologies. As the only permanent intergovernmental body of the United Nations dedicated to road safety, the Global Forum for Road Traffic Safety provides a unique platform to seize the potential of the Conventions and exchange best practices worldwide”, said Ms Luciana Iorio, Chair of the Global Forum.

Created to increase road safety through the exchange of good practices in order to derive the best common solutions, the 1968 Convention on Road Traffic is the key legal instrument forming the basis for the majority of traffic rules around the world. There are 78 Parties to the Convention, in Europe, Africa, the Middle East, Asia and Latin America, with Nigeria being the latest country to join in October 2018. By acceding to the Convention, countries agree to transpose uniform ‘rules of the road’ in their domestic traffic legislation for safe driving behaviour. Countries’ reciprocal recognition of documents issued in conformity with these rules further facilitates safe international road transport.

The 1968 Convention on Road Signs and Signals, which counts 66 Contracting Parties in Europe, Africa, the Middle East, Asia and Latin America, prescribes a harmonized system of signs and signals based on the use of shapes, colours, and the use of graphic symbols. This Convention also sets out the requirements for road markings and defines the different types of markings and their colours.

Fifty years on, the Conventions are continuously evolving to meet the road safety needs of today and tomorrow. 2016 saw a breakthrough for automated driving technologies with the entry into force of an amendment to the Convention on Road Traffic allowing the transferring of driving tasks to the vehicle, provided that these technologies are in conformity with the United Nations vehicle regulations or can be overridden or switched off by the driver. In September 2018, a new resolution on the deployment of highly and fully automated vehicles in road traffic was adopted.

The Convention texts and details of their amendments are available at: http://www.unece.org/index.php?id=26749

Read more about UNECE’s work on the Conventions: http://www.unece.org/trans/main/welcwp1.html

Watch the video “50 years of safer roads: the 1968 Conventions on Road Traffic and Road Signs and Signals”: https://www.youtube.com/watch?v=TSX_1iCV5CA&feature=youtu.be

UNECE has a long history of promoting road safety. In 1950, UNECE created a working group focusing on the prevention of road accidents, establishing in 1988 what is now the Global Forum for Road Traffic Safety (WP.1). The primary function of the Global Forum and other related working parties at UNECE is overseeing the United Nations legal instruments aimed at improving road safety. These legal instruments, such as the 1949 and 1968 Conventions on Road Traffic, the 1968 Convention on Road Signs and Signals, the 1970 European Agreement concerning the Work of Crews of Vehicles Engaged in International Road Transport (AETR), the 1958, 1997 and 1998 “Vehicle Regulations” Agreements and the 1957 European Agreement for the International Carriage of Dangerous Goods by Road, help create a legal framework that addresses the main causes of traffic accidents such as driver behaviour, road infrastructure and vehicle safety. The “Vehicle Regulations” agreements are overseen by the World Forum for the Harmonization of Vehicles (WP.29) while the 1957 European Agreement for the International Carriage of Dangerous Goods by Road is overseen by the Working Party on the Transport of Dangerous Goods (WP.15). Together, these legal instruments provide a roadmap that allows governments to create safer roads for all.

Given this role, UNECE also hosts the Secretariat of the Secretary-General’s Special Envoy for Road Safety, and the United Nations Road Safety Trust Fund which was launched in 2018.