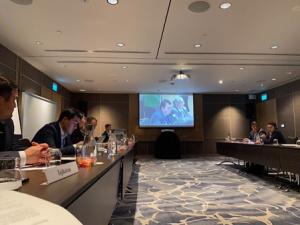 SPECA countries are facing unique challenges, stemming from at least three crises: the need to deal with the regional and global repercussions of the COVID-19 pandemic, the political upheaval in Afghanistan, and the conflict in Ukraine. With the correct policies and mechanisms for subregional cooperation, they can mitigate procedural problems for intraregional and interregional trade, establishing circular economies, and supporting sustainable economic growth.

This effort received a further boost on 31 August 2022, at the 17th session of the SPECA Working Group on Trade, held back-to-back with a successful Asia-Pacific Trade Facilitation Forum in Singapore. UN Regional Commissions UNECE and UNESCAP, together with the Asian Development Bank, jointly organized this meeting, with the SPECA countries (Central Asia and Azerbaijan) in attendance. The meeting focused on SPECA country efforts to advance the five key areas dealt with by the Working Group on Trade. The representatives of the SPECA countries took stock of the achievements in 2021-2022, including:

Deputy Minister of Economic Development and Trade in Tajikistan and Chair of the Working Group on Trade, Mr. Abdurahmon Abdurahmonzoda, reported on the invaluable contribution of the work under the Group in 2021-22. Rupa Chanda and Elisabeth Tuerk, Directors of the trade divisions in UNESCAP and UNECE respectively, noted the importance of the SPECA programme, reiterating the support of their organizations to countries’ sustainable recovery from the current crises.

SPECA countries’ cooperation in the WTO has been overwhelmingly positive. They reinforced this cooperation in 2022 and pledged support to Azerbaijan, Turkmenistan, and Uzbekistan on their way to WTO accession. SPECA countries continue working to share information on procedures and harmonize border-crossing procedures between countries, a move that would positively impact their economies. UNECE Regional Advisor Mario Apostolov presented a guide recently published by the WTO about creating trade facilitation enquiry points (WTO Trade Facilitation Agreement, Art.1.3), noting that Uzbekistan already used it to create its enquiry point, and invited other countries to follow this example. The group further embraced the digitalization standards laid forth by the UNECE, agreeing to strengthen future work on the subject.

Ms. Ainura Usenbekova, Deputy Minister of Economy and Commerce of the Kyrgyz Republic, and Mr. Igbal Babayev, Deputy Director General of the State Customs Committee of the Republic of Azerbaijan, expressed demand for further work on concrete digitalization projects, using the international standards.

Looking forward, the countries recommitted to further improving trade practices and sustainability. They will update the SPECA Trade Facilitation Strategy roadmap, create a roadmap for implementing the principles of sustainable trade, and prepare for the 2023 session of the SPECA Working Group on Trade, when Azerbaijan will chair the Group.