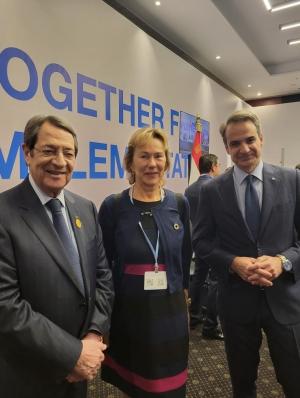 The 18 countries in the Eastern Mediterranean and Middle East, which are home to some 450 million inhabitants, are particularly vulnerable to climate change. Under a “business as usual” scenario, they risk facing a 5°C increase in the mean annual temperature by the end of the century, which would bring catastrophic consequences.

The Eastern Mediterranean and Middle East (EMME) Climate Change Initiative, launched by the presidents of Cyprus and Egypt at COP27 this week, aims to bring these countries together to coordinate a concerted regional response to address the climate crisis, in line with the goals of the Paris Agreement.

“Climate change cannot be tackled without a coordinated response that can only be achieved through close international cooperation,” Ms. Algayerova said. “The Eastern Mediterranean and Middle East Climate Change Initiative is a key step forward, putting in practice the principles of the Nicosia Ministerial Declaration adopted by the 9th Environment for Europe Ministerial Conference in early October.”

The initiative is based on the scientific work of 13 thematic task forces, comprising over 240 scientists. Their work was coordinated by the Cyprus Institute and resulted in a regional action plan to address the climate crisis.