The Special Envoy was in Kenya on 26 and 27 February 2018 and held the following bilateral meetings: 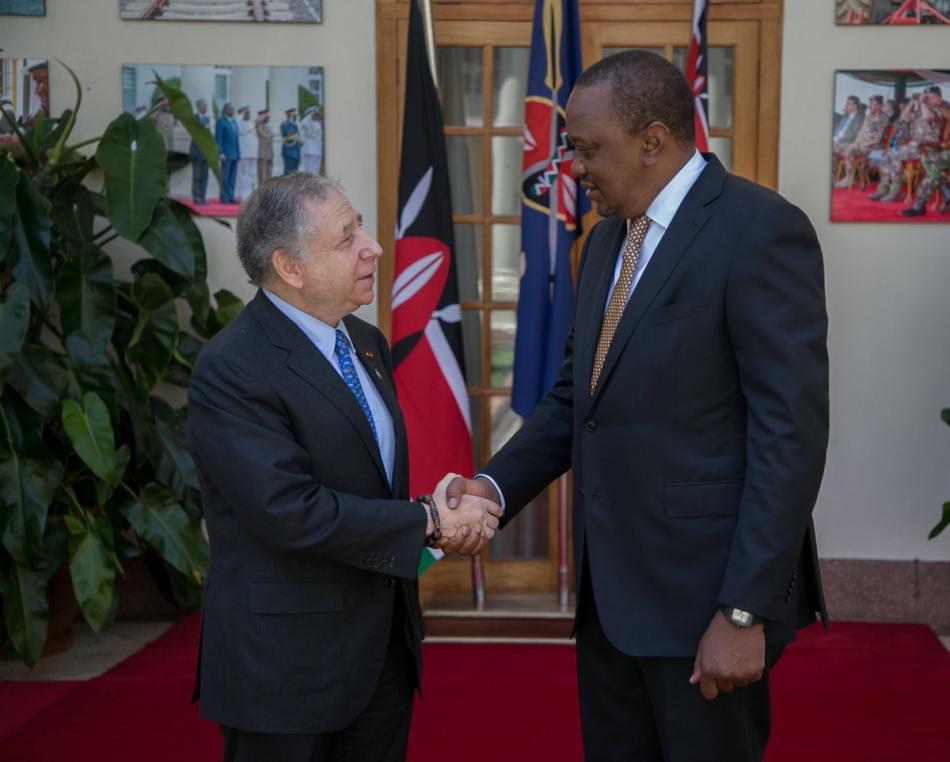 H.E. Mr. Uhuru Kenyatta, President of KenyaThe Special Envoy provided an overview and update on his activities since their last meeting in August 2015, including on progress on the establishment of the United Nations Road Safety Trust Fund. He reiterated that Kenya has acceded to only one of United Nations road safety conventions - the 1968 Convention on Road Traffic, and encouraged the President to consider accession to remaining five priority conventions. The President expressed his commitment to make road safety a top priority on his agenda for his new term in the office and arranged a meeting for the Special Envoy with the Minister of Transport.
Mr. James Wainaina Macharia, Cabinet Secretary, Ministry of Transport, Infrastructure, Housing and Urban Development
Sharing the President’s expressed commitment to road safety as a key priority of his new term, the Special Envoy encouraged the Minister’s strong engagement in these efforts. This includes consideration of accession to and implementation of the UN Road Safety Conventions and addressing of top risk factors such as drink driving, speeding, and non-helmet, safety belt and child restraint use. The Special Envoy assured the Minister that by taking these measures, Kenya could see a significant decline in road traffic fatalities, as evidenced by success of developed countries such as France, and could serve as an example for the region. Recognizing the past engagement with the Kenyan NTSA, they agreed that there was a clear way forward for better road safety practices in the country.
Ms. Maimunah Mohd Sharif, Executive Director of UN-Habitat
The Special Envoy provided an overview of his role and mandate as well as the summary of his activities to date. The Special Envoy outlined the regional observatories initiative, aimed at harmonized data collection and monitoring, while expressing interest in working with UN-Habitat to address the issue in various cities, including in Nairobi. The Executive Director highlighted the importance of urban planning when designing cities and agreed that cities need Sustainable Urban Mobility Policies and Plans which consider road safety. UN-Habitat agreed to share a proposal on a pilot demonstration project for Nairobi on road safety for pedestrians and cyclists. In addition, UN-Habitat will engage in the development of the African road safety observatory by suggesting a selection of a cities in Africa, Europe, LAC and Asia regions for monitoring improvements. Ms. Sahle-Work Zewdie, Director-General of United Nations Office in NairobiThe Special Envoy shared an update since their last meeting in August 2015, including progress on the establishment of the United Nations Road Safety Trust Fund. He highlighted the unique position that UNON has to an impact in Kenya and across the region with its hosting of many key UN agencies, such as UN-Habitat and UNEP. 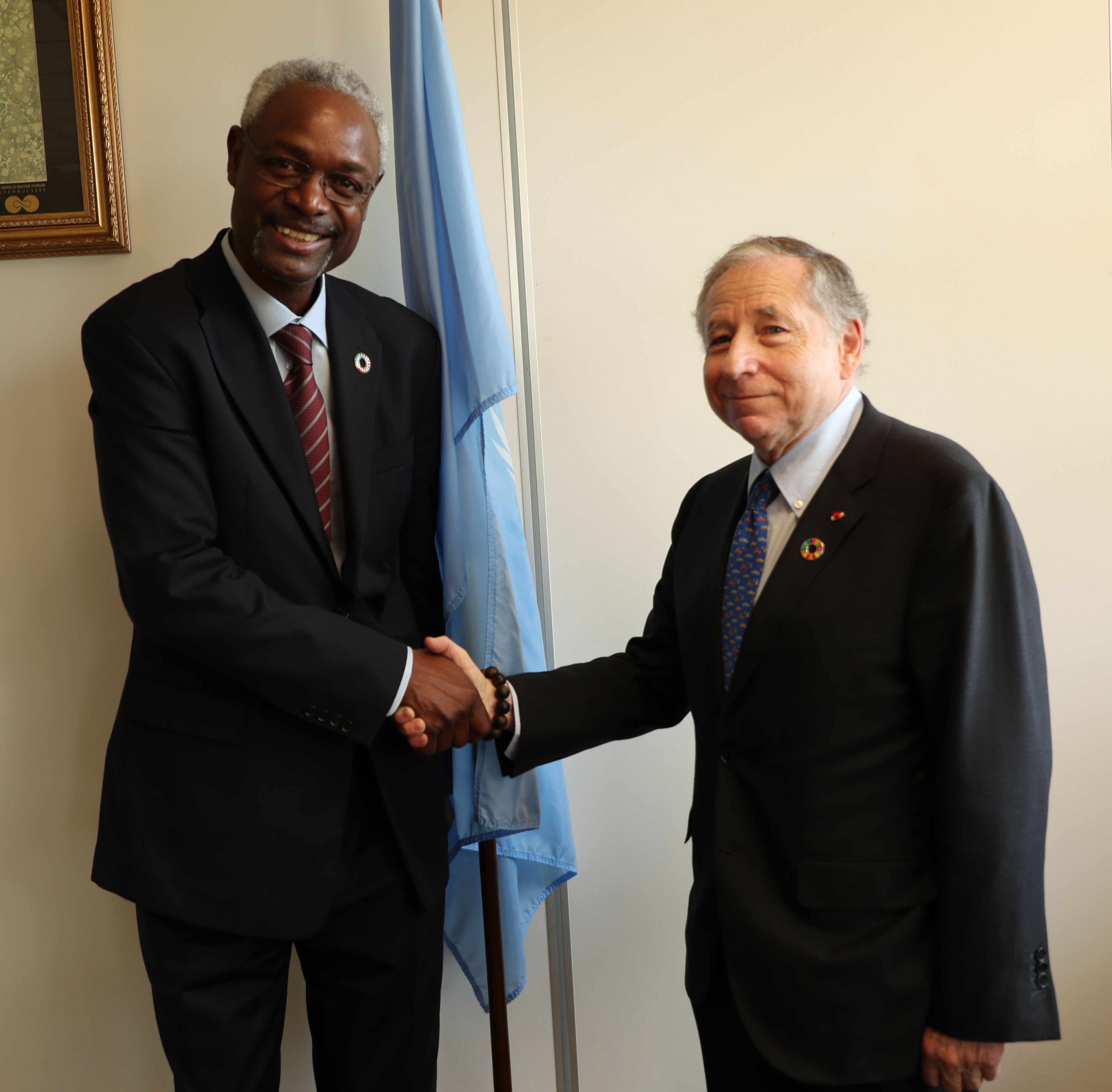 Mr. Ibrahim Thiaw, Deputy Executive Director of UN Environment Programme
The Special Envoy reiterated his strong interest for UNEP’s increased engagement in road safety, recognizing the growing intersection to their work. For example, both safety and emission issues must be addressed in the large number of used and old vehicles imported into the African region. Furthermore, sustainable transport and mobility in the urban setting is a clear point of intersect for safety, sustainable development and environment, with a role for many UN agencies including UN Habitat and the regional commissions. The Special Envoy encouraged stronger collaboration with UN Habitat suggesting for Nairobi to serve as a “model” clean, green, sustainable and safe city in the region. The Deputy agreed that there were many opportunities for increased work on road safety and expressed interest in greater collaboration. The Special Envoy provided an update on the establishment of the United Nations Road Safety Trust Fund, explaining that UNEP will receive an invitation to become a participating organization of the Fund in the coming weeks.
Background information:Kenya has a population of 48,46 million, which increases by an estimated one million a year (World Bank, 2016). According to the WHO estimate, Kenya suffers from 12,891 fatalities annually and based on figures of the Kenyan National Police Service, nearly half of the road fatalities (47%) are reported to be suffered by pedestrians. According to the WHO data, Kenya’s national seat-belt and speeding laws are strong, but laws addressing drink driving, child seats, and helmets needs to be improved. Kenya is a contracting party to one of six UN Road Safety Conventions: the 1968 Road Traffic Convention.The Special Envoy last visited Kenya in December 2016 to host a Regional Road Safety Workshop for Anglophone Africa and met with Mr. Francis Meja, Director General, National Transport and Safety Agency Authority (NTSA), Mr. Inguru Nyakera, Principal Secretary, State Department of Transport, Infrastructure, Housing and Urban Development, and Mr. Ibrahim Thiaw, UNEP Deputy Executive Director.