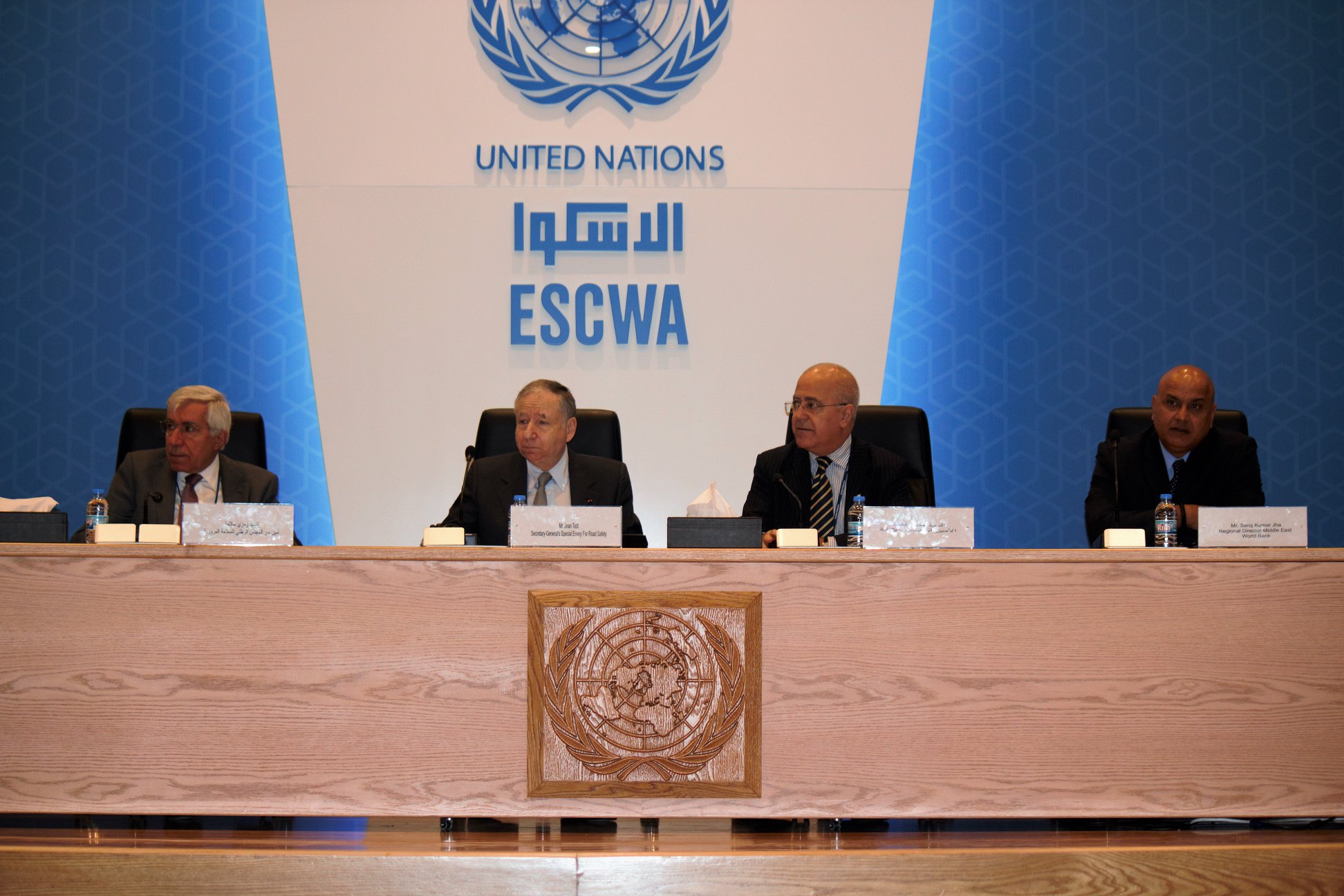 The workshop was opened by Mr. Jean Todt, alongside the World Bank Regional Director, Mr. Saroj Kumar Jah; Dr. Ramzi Salamah, Secretary of National Council for Road Safety (NRCS) in Lebanon and ESCWA Acting Executive Secretary, Mr. Mounir Tabet.
“While there is progress being made, in Lebanon and in all your countries, we cannot ignore that this region suffers from some of the highest road fatality rates”, the Special Envoy emphasized the urgency to tackle the road safety issues in the region in his opening remarks, “Road crashes resulted in 72,000 deaths in 2013 in the region. It has an average fatality rate of 21 per 100,000, compared to world average of 17, and to EU rate of 5. Lebanon is at 23”.
A number of recommendations were issued during the workshop, most notably a proposal to establish a regional observatory that coordinates and facilitates national data, implement or activate national Systems for road safety management, including national lead agencies and coordination mechanisms, in addition to enhancing cooperation between various stakeholders. “This observatory will be the official reference for the road crashes statistics and all matters related to road safety,” Dr. Ramzi Salamah explained, "We also established a road safety observatory in cooperation with private sector companies that will hopefully fill gaps in the region and attract researchers from various universities in Lebanon and interested parties.”
During the workshop, ESCWA presented the results of the surveys conducted and the data found in the second half of 2018 on road safety management. The UNECE also presented the Global Framework for Road Safety Action Plan, in which regional and national action plans were to be developed in harmony.
The workshop gathered 70 participants representing 16 countries, among them high-ranked officials from the Ministries of Transport and Ministries of Interior from Arab States. The participants agreed on an outcome document highlighting the key priorities for road safety management in the region through 2020. The workshop came within the framework of the 19th meeting of the ESCWA Committee on Transport and Logistics, which started on 26 November and emphasizes, in addition to road safety, on the urgent need for concerted Arab efforts to address the changes and their impact on the transport sector and the importance of maritime transport and the  evaluation of Arab economic integration.
Prior to the workshop, the Special Envoy and ESCWA Acting Executive Director opened an exhibition to raise awareness about road safety issues such as the use of seatbelts and the consequences of getting distracted or being under the influence while driving. The exhibition was held in association with Saint Joseph University in Beirut (USJ), the Internal Security Forces (ISF) of Lebanon, the Lebanese Red Cross, the Yaza and Kunhadi organizations, the George Khoriaty Foundation (GNK) and other government agencies as well as non-governmental organizations specialized in road safety.
______________WORKSHOP AGENDAFinal AgendaPOWERPOINT PRESENTATIONSSession 2: Overview of National Systems for Road Safety Management (in Arabic)Session 3: Global Framework Plan of Action for Road SafetySession 4: Policies, strategies and action plans: Basic elements (in Arabic)Sustainable Road Safety: Lessons from The NetherlandsSession 6: Improving road crash data collection systems and data sharing in the EuroMed regionGood practices national and regional observations on road safetySession 7:Implementation of the United Nations road safety conventions and related actionsSession 8:Islamic Development Bank, Approach to support road safety initiativesWORKSHOP SUMMARYArabic   |   English (coming soon)OUTCOME DOCUMENTRegional Priorities for Road Safety Management, 2019-20LIST OF PARTICIPANTSFinal List of ParticipantsPHOTOSFacebook album