About the Trans-European Railway (TER) Project

The TER Project is organized around three pillars:
1. The active participation and support of member countries through the Trust Fund Agreement, deposited with UNECE, which nominates the Project's Steering Committee as its highest administrative and political body, formed by national delegates from each participating country.

2. The Project Central Office in Belgrade, hosted by the Government of Serbia, with Project office personnel coordinating activities.

3. National Project Offices set up or designated in each participating country to liaise between national activities and those under the Project. These national offices operate under the responsibility of a nominated National Coordinator from every member.

The annual and longer term action plans are set by the Steering Committee and the work is done by the Project's personnel, Working Groups, Ad hoc Expert Groups, and when required by external consultants in close co-operation with member countries. 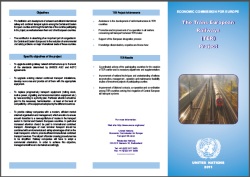