Chair of the Commission 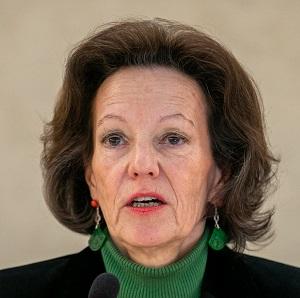 The Commission at its 69th  session (20-21 April 2021) elected its new Bureau, with Austria as Chair;  Switzerland and Turkmenistan as Vice-Chairs.

Elisabeth Tichy-Fisslberger studied Law and Languages (French, Spanish) at the University of Vienna. After post-graduate studies in international law at the University of Louvain-la-Neuve in Belgium, she started her professional career working in Brussels for the Commission of the European Union for six years before joining the Diplomatic Service of the Republic of Austria in 1988.

In the Foreign Ministry, she held a number of positions within the Directorate General for European and Economic Affairs during her mostly multilateral-focused career. Foreign postings included the Austrian Embassies in Dublin and London as well as the Permanent Representation of Austria with the European Union in Brussels. There, she was part of the team which negotiated Austria’s accession to the European Union and stayed on to help run the first Austrian presidency of the Council of the European Union.

In 2003 she was appointed Deputy Director General for European and Economic Affairs in the Ministry of Foreign Affairs, in 2007 Director-General for Legal and Consular Affairs. In this role, her responsibilities included among other issues – dealing with a number of international organisations in the areas of justice and home affairs. Moreover, she was appointed the first Austrian National Coordinator for the Fight against Human Trafficking.

In December 2017 she was appointed Permanent Representative of the Republic of Austria to the United Nations Office and other International Organisations in Geneva.

In the year 2020 she served as the President of the UN Human Rights Council.

Ambassador Tichy-Fisslberger is married and has one daughter.