Managing Methane for a better Climate

Managing Methane for a better Climate

Methane is produced by a variety of human activities 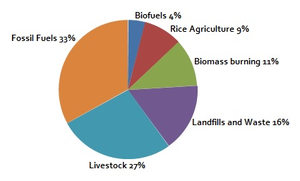 About 60% of global methane emissions are a result of human activity. The main sources of anthropogenic methane emissions are the oil and gas industries, agriculture, landfills, wastewater treatment, and emissions from coal mines. Fossil fuel production, distribution and use are estimated to emit 110 million tonnes of methane annually.

Methane is the primary component of natural gas, with some emitted to the atmosphere during its production, processing, storage, transmission, distribution and use. It is estimated that around 3% of total worldwide natural gas production is lost annually to venting, leakage, and flaring, resulting in substantial economic and environmental costs. 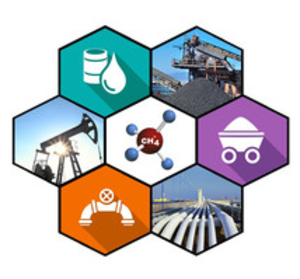 Coal mining related activities, such as extraction, crushing, distribution, and the like also lead to the release of a substantial amount of methane that is trapped in the coal seam. Methane is emitted from active underground and surface mines, as well as from abandoned mines and undeveloped coal seams.

Although methane is a relatively short-lived climate pollutant as it remains in the atmosphere for a relatively brief period of time, its atmospheric volumes are replenished continuously.  As a consequence, its high warming potential makes effective methane management an imperative part of climate change mitigation strategies.

As of today, there is neither a common technological approach to monitoring and recording methane emissions, nor a standard method for reporting them. Available information regarding methane emissions from extractive industries is relatively sporadic and often based on estimates. Therefore, the extent of the challenge and opportunity to manage such emissions remains largely undefined.

To remedy that situation UNECE is exploring current practices and technologies along the value chain in key energy-related extractive industries, namely coal, natural gas and oil.

This year UNECE will publish guidance on developing and implementing effective monitoring, reporting and verification practices and on mitigating methane emissions from the oil and gas sectors. The forthcoming publication is “principles-based,” recognizing that conditions vary greatly across oil and gas facilities, and that legal, political and institutional aspects differ by jurisdictions. It is intended to serve as a resource for a broad audience, including owners and operators of oil and gas facilities and policymakers at all levels of government.