On 9 September 2020, the Special Envoy along with H.E. Mr. Walter Stevens, Permanent Representative of the European Union to the United Nations Office and Other international organisations in Geneva, chaired the Geneva Friends for Road Safety Network event “A New Decade for Road Safety”, hosted by H.E. Mr. François Rivasseau, Permanent Representative of France to the Office of the United Nations and Other International Organizations in Geneva. 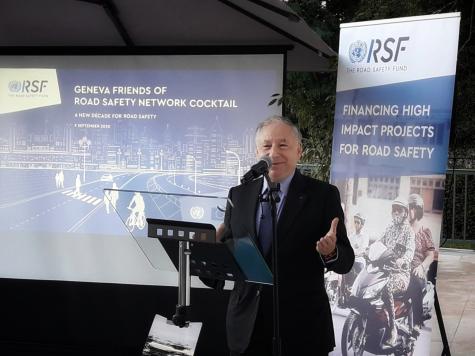 This occasion was an opportunity for the Friends to further strengthen efforts in promoting road safety as members of the Network during the next Decade of Action (2021-2030). Almost 30 participants, among Ambassadors, UN officials and stakeholders, joined the event, representing thirteen Member States and seven different organizations and departments.

The Special Envoy delivered a speech during which he congratulated France for being newly appointed as Advisory Board member of the UNRSF. He also applauded to the Russian Federation for not only being a Steering Committee member and donor to the Fund, but also for pushing through the UN General Assembly Resolution on Improving Global Road Safety (A/RES/74/299) adopted in New York on 31 August 2020, which paved the way for the Second Decade of Action for Road Safety (2021-2030).

The Special Envoy encouraged to ensure that the above targets are met come 2030 and that the UN Road Safety Fund is well placed and funded to play the much-needed role that it was established to perform. He also informed that the UNRSF Advisory Board members elected Mr. Matthew Baldwin, the Deputy Director-General European Coordinator for Road Safety and Sustainable Mobility, European Commission, Mobility and Transport DG, as their new Chair.
Lastly, the Special Envoy asked the Geneva Friends to step up efforts to realize the trasformative road safety vision of the 2030 Agenda for Sustainable Development.

Videos played during the event:

EU video "From Geneva to the World"

UNRSF video "Save Lives with the UNRSF"