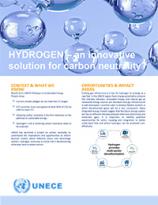 Recognizing that gaseous fuels will continue to serve as an energy vector in a foreseeable future, the UNECE Group of Experts on Gas and the Group of Experts on Renewable Energy are exploring the synergies between renewable energy and gas and pathways that lead to decarbonization. The two Groups joined forces and offered their support to ECE member States in developing policies needed to accelerate development, demonstration and deployment of renewable, decarbonized and low- and zero-carbon gas projects. Deploying blue and green hydrogen is a key avenue of action.

With this in mind, UNECE created a Task Force on Hydrogen under joint auspices of the Group of Experts on Gas and the Group of Experts on Renewable Energy. According to its informal Terms of Reference the Task Force will advise the Committee on Sustainable Energy on how to help the UNECE member States meet their international commitments in decarbonising energy systems by harnessing hydrogen and other decarbonized gases.

The Task Force’s ambition is to catalyse dialogue on clean hydrogen to the highest levels of policy making across the UNECE region and beyond and engage a wide community in this dialogue. 29 October 2020 – Hydrogen is a bridge to achieving carbon neutrality. It is not zero-carbon today, but should be in the future. To achieve that, good planning is key. Some member States have already developed a hydrogen strategy, some are working on it. Who does what on hydrogen and how UNECE could help the member States coordinate their efforts is in the presentation that was given on 29 October 2020 at the online conference: “Development of renewable energy sources in the European Union and the assessment of their effectiveness”, organized by the Nizhny Novgorod State Technical University R.E. Alekseeva.

On 25 March 2020 UNECE held an Online Hydrogen Workshop in partnership with World Energy Council (WEC) to discuss steps towards a hydrogen enabled future. The objective of the workshop was to i) develop a catalogue of regulations and standards in need of revisions for hydrogen to be able to heat homes and fuel cars within the UNECE region; ii) facilitate international and cross-sector strategic knowledge exchange around public acceptability and the potential of a hydrogen economy for the UNECE region. Read more