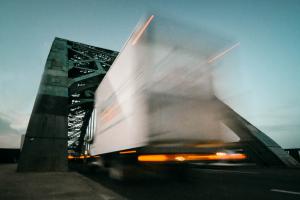 The number of accidents involving trucks and coaches on the road could soon be reduced with the extension of the use of Advanced Emergency Braking System (AEBS). Initially designed to improve safety on motorways, the scope of UN Regulation No. 131 will be widened to include other road contexts, including in urban areas.

The draft new provisions for trucks and coaches under UN Regulation No. 131 were endorsed by the Working Party on Automated/Autonomous and Connected Vehicles (GRVA) on Friday 28 January. If adopted by the World Forum for the Harmonization of Vehicle Regulations in June 2022, the revised UN Regulation would enter into force by February 2023.

The strengthened provisions introduce much stronger automated braking in response to the detection of stationary objects, even if the driver has not been alerted beforehand by a warning system. This is important if, for example, the traffic situation suddenly worsens due to heavily braking vehicles in front.

The new measures, which build on experience gained with AEBS over recent years, should significantly reduce accidents and resulting fatalities in traffic jam situations. Studies by the German Road Safety Council and accident evaluations by Germany’s Federal Highway Research Institute (BASt)  show that in 6 European countries (Austria, France, Germany, Italy, Sweden and the UK), rear-end accidents involving Heavy Duty Vehicles caused the deaths of over 1,000 people between 2016 and 2018. In more than half of the serious accidents recorded, the vehicle hit from behind was stationary or came to a standstill before the collision.

The new provisions will also restrict the conditions under which emergency braking assistance systems can be switched off. Once switched off, the systems must be automatically reactivated after 15 minutes, meaning that in practice, the system will be activated almost permanently.

To better protect vulnerable road users, the proposed revisions require heavy vehicles’ AEBS to be able respond to the detection of pedestrians and avoid accidents up to 20 km/h driving speed.

The provisions were developed by a working group, composed of international experts from countries, industry and road safety associations, which was chaired by Germany and Japan.