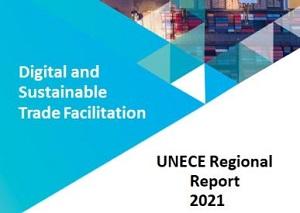 The trade facilitation performance of 44 UNECE member States has improved from 72 per cent in 2019 to 76 per cent in 2021, according to the Regional Report on Digital and Sustainable Trade Facilitation 2021 released today. The report contains the results from the United Nations Global Survey on Digital and Sustainable Trade Facilitation 2021. The improvement in the UNECE region was evident despite the temporary closure of borders and services thereof and the overall disruption in the supply chains in 2020 due to the COVID-19 pandemic.

The improvement was evident in all country groups across UNECE member States including economies in transition, except Eastern Europe, which did not see any change in the performance since 2019. Central Asian countries registered the highest progress – from 54 per cent in 2019 to 64 per cent in 2021. Although South-eastern Europe has the lowest implementation rate to date, progress has been made since the last survey in decreasing the gap between this country group and the other country groups of transition economies.

The results of the 2021 survey show improvements in the implementation rate of all five trade facili­tation subgroups, including in Paperless trade and in Cross-border paperless trade. This indicates the increased priority, in light of the pandemic, given to electronic submission of documentation and implementation of digital systems used to facilitate trade across borders. The emphasis and reinforcement in digital services by the governments can be partly associated with the disruptions faced during the pandemic.

The survey results point to increa­sed interest of member States in responding to questions related to sustainability and trade facilitation – a topic requiring adequate attention from policy makers. The subgroups containing provisions related to small and medium enterprises (SMEs), agriculture trade and women traders, reached a moderate 45 per cent, 61 per cent and 27 per cent implementation rates respectively for the UNECE region.

In response to the COVID-19 pandemic, a new module on trade facilitation in crisis times was integrated in this year’s survey questionnaire. The results indicate mixed-reactions from the regulatory agencies including some changes in operating procedures at the borders and increased focus on digital solutions. However, these reactions were mostly temporary in nature.

The report includes some important recommendations including developing a national trade facilitation roadmap, urging the wide range of stakeholders across countries and regions for greater cooperation to build stakeholders’ capacity, including countries with economies in transition, to roll out, implement and ultimately benefit from implementation of international instruments. These instrument including recommendations and standards such as those developed by the United nations Centre for Trade Facilitation and Electronic Business (UN/CEFACT), are tools available to move towards alignment and, eventually, harmonization of trade facilitation practices and promote digital trade facilitation solutions.

During the past four decades, UN/CEFACT has developed about 50 trade facilitation recommendations and hundreds of e-business standards, technical specifications and guidance materials on electronic exchange of trade data. The report includes a detailed matrix about the UN/CEFACT instruments that can help implement the trade facilitation measures included in the survey questionnaire.

The biennial survey is a joint initiative of the United Nations Regional Commissions under the Joint Approach to Trade Facilitation agreed by the Executive Secretaries in 2010. The next survey is scheduled to take place in 2023.