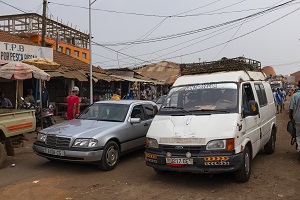 The UN Road Safety Fund (UNRSF) is launching a project to regulate the export and import of used vehicles in West and East Africa, in countries such as Cameroon, Côte d'Ivoire or Uganda .  The "Safer and cleaner used vehicles for Africa" initiative will put in place requirements to ensure that participating countries only receive quality used vehicles, helping to save lives of both car drivers and other road users.

The project, implemented by the UN Environment Programme (UNEP), will develop a programme bringing exporters, mainly the European Union, the United States and Japan, and African importing countries together, to agree to adhere to a minimum level of UN regulations for used vehicles. The programme will also support African countries to develop and implement national regulations, including vehicle labelling, inspection and enforcement.

A major global challenge to road safety and clean and affordable road transport is the rapid growth of used vehicles in developing countries. The African vehicle fleet is set to grow four to five times by 2050. 80-90 per cent of this growth will come from the import of used vehicles. Today, a significant share of these imported used vehicles in Africa offer low levels of safety and environmental protection, with high associated economic costs.

Ensuring a minimum set of operational safety features leads to a 30% reduction in mortality and morbidity, according to a study of the Transport Research Laboratory looking at the impact of UN regulations on road safety. Periodic technical inspection also decreases the number of vehicles involved in fatal accidents due to technical defects by 50%. Ensuring vehicles are equipped with well-functioning equipment to reduce emissions, e.g. exhaust filters, results in emissions reductions of up to 90% (compared to vehicles not equipped with filters or equipped with non-working filters).

The main activities of the UNRSF project are to develop an action plan with used vehicles requirements, with an agreement on the minimum level of UN regulation to be observed, the enforcement of the action plans with a technical support on inspection and the establishment of a working group to develop used vehicle labelling. The project will also create awareness among stakeholders about the issues and promote a harmonized approach with regional and national communication campaigns.

The UNRSF project is being implemented while an UNEP report is published on the environmental impact of export of used vehicles to developing countries. "Used vehicles and the Environment- A Global Overview of Used Light Duty Vehicles: Flow, Scale and Regulation", the first report of its kind, calls for action to fill the current policy vacuum with the adoption of harmonized minimum level of UN regulation that will ensure used vehicles contribute to cleaner safer fleets in importing countries. The report shows that between 2015 and 2018, 14 million used light-duty vehicles were exported worldwide. Some 80 per cent went to low-and middle-income countries, with the majority going to Africa (40 per cent), followed by countries in Eastern Europe (24 per cent), Asia-Pacific (15 per cent), the Middle-East (12 per cent) and Latin America (9 per cent). A recent review conducted by the Netherlands of its exports of used vehicles found that most of these did not have a valid roadworthiness certificate at the time of the export.

A number of African countries have already put in place minimum quality standards. Ghana was the first country in the West Africa region to shift to low sulphur fuels and this month has imposed a 10-year age limit for used vehicle imports.

With a total budget of nearly USD 500,000, the UNRSF project will scale the Fund’s geographical and programmatic footprint in the coming months.

Note to editors About UN Conventions on Road Safety

The UN conventions on road safety, administered by UNECE, serve as a foundation for states to build national legal frameworks to prevent death and injuries from road traffic crashes. Road safety governance is above all about political will. To help put this into action, the United Nations General Assembly resolutions on “Improving global road safety” encourage all Member States to accede to the UN conventions and agreements.

Regarding the exportation and importation of used vehicles, three conventions are considered to be priorities: http://www.unece.org/DAM/road_Safety/Publications/United_Nations_Road_Safety_Conventions_01.pdf  About the UN Road Safety Fund

Established in April 2018, the United Nations Road Safety Fund aims to contribute to two major outcomes, assisting UN Member states to (a) substantially curb the number of fatalities and injuries from road traffic crashes, as well as (b) reduce economic losses resulting from these crashes. Building on the best practices and expertise developed through the Decade of Action for Road Safety, the Trust Fund will focus on supporting concrete actions helping to achieve the road safety-related targets of the Sustainable Development Goals (SDGs).

The Secretariat of the Fund is hosted by UNECE. More information about UNRSF projects About the UN Environment Programme

UNEP is the leading global voice on the environment. It provides leadership and encourages partnership in caring for the environment by inspiring, informing, and enabling nations and peoples to improve their quality of life without compromising that of future generations.