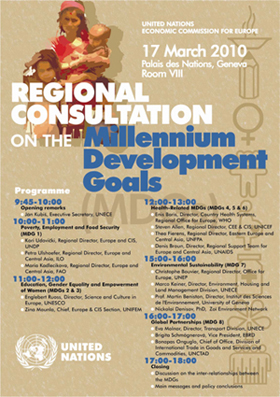 UNECE is organizing a regional consultation on the Millennium Development Goals (MDGs) on 17 March 2010 at Palais des Nations (Salle VIII). Achieving the MDGs is still a challenge for many countries of the UNECE region, which gathers a large group of advanced economies, but also a significant group of emerging economies, and a few of the world’s most vulnerable countries. The latter two categories are located in the eastern part of the region, which includes the 12 countries in Eastern Europe, Caucasus, and Central Asia (EECCA) and 6 countries in South-East Europe (SEE). In addition, the UNECE region comprises a number of intermediate-income economies, primarily the EU new member states to which some MDGs targets apply while others do not.A few targets apply even to the advanced European economies, particularly in the areas of gender equality, environmental sustainability and, to a lesser extent, poverty. These economies have also made a global commitment to help the developing world achieve its targets through financing for development, including ODA, and improving the world’s trading system.This consultation will thus be an opportunity to substantiate the relevance of the MDGs for the UNECE region by identifying the major gaps in their achievement. It will also look ahead by considering the set of policies needed to address these gaps in the forthcoming years. This substantive review will draw extensively from the Heads of Europe and Central Asia of the UN organizations that are actively supporting the MDGs in the region within their respective areas of competence. They will participate in the panel discussions dedicated to each MDG, which will be followed by an interactive debate with the audience The conclusions of this consultation will provide inputs to the preparations for the High-level Plenary Meeting of the United Nations General Assembly’s 65thsession, which will be held on 20-22 September 2010 and will focus on accelerating progress towards achieving all MDGs by 2015. Please click for more information about the programme. Ref: ECE/OES/10/P02