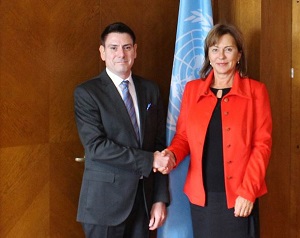 Efficient and interconnected transport corridors integrating all transport modes (so-called “intermodal transport”, smoothly integrating sea, rail, road and air) are key to facilitate commercial exchanges and movements of people in a safe, efficient and sustainable way, thus fostering economic activity and sustainable development. This is particularly true in the Western Mediterranean, which connects Southern Europe (185 million people and Gross Domestic Product of EUR 4,847 bn in France, Italy, Malta, Portugal and Spain) and the Maghreb (96 million people and GDP of EUR 297 bn in Algeria, Libya, Mauritania, Morocco and Tunisia), and acts as a crossroads connecting Europe and Africa.

In order to better contribute to the further development of comprehensive road, rail, port and airport networks for passengers and freight in Southern Europe and the Maghreb, UNECE and the Centre for Transportation Studies for the Western Mediterranean (CETMO) are strengthening their cooperation through a Memorandum of Understanding signed today.

Under this agreement, the two partners will work together to develop transport corridors connecting Africa and Europe through the Western Mediterranean and promote the accession of Maghreb countries to UNECE-administered UN international legal instruments aiming at facilitating international transport and trade.

UNECE Executive Secretary Olga Algayerova stated: “This partnership with CETMO will facilitate the connection of the Western Mediterranean to the fast-developing Euro-Asian Transport corridors linking East Asia and Europe. This should open up new trade opportunities in support of the socioeconomic development of the region and its people, thus supporting countries in the Western Mediterranean in their efforts to achieve the Sustainable Development Goals.”

CETMO General Director Oscar Olivier said: “By joining forces with UNECE we aim at accelerating the development of intermodal transport corridors as a comprehensive approach to addressing both infrastructure development and facilitation measures to increase efficiency of logistics and supply chains across the Western Mediterranean.”

The two institutions will develop and implement, as appropriate, joint programmes and projects to identify and address international transport and logistics issues of priority. This will include, in particular: identifying investment priorities for the development of corridors in Southern Europe and the Maghreb through close cooperation in the work carried out under UNECE’s Euro-Asian Transport Links project; promoting these investment priorities to International Financial Institutions and other donors; supporting transport infrastructure development including upgrading of priority road and railway routes and construction of missing links, logistics centres, dry ports, etc.; supporting the simplification and harmonization of administrative border crossing procedures and documentation; developing safety and security; supporting capacity building and carrying-out national transport development and performance reviews.

CETMO was created in 1985 as the Technical Secretariat of the Group of Transport Ministries of the Western Mediterranean.