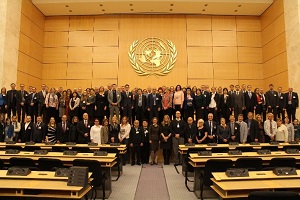 Over the last few years, the world watched on as major environmental disasters that triggered technological accidents, such as Hurricane Harvey and the Fukushima power plant disaster, wreaked havoc on environments, lives and economies. Major accidents with far-reaching adverse effects can happen anywhere – including in the UNECE region, such as the Baia Mare cyanide spill in Romania in 2000, the accident at a tailings site in Ridder, Kazakhstan in 2016, and an oil refinery blast in Bosnia and Herzegovina in 2018, all of which affected neighbouring or riparian countries.

Aiming to minimize the threats posed by industrial hazardous activities, more than 100 representatives of 50 countries, international organizations, NGOs and the private sector from within and outside the UNECE region gathered in Geneva this week for the tenth meeting of the Conference of the Parties to the UNECE Industrial Accidents Convention, to adopt a number of significant decisions.

The Parties adopted the long-term strategy for the Convention until 2030, strengthening alignment with key international frameworks including the Sendai Framework and the Sustainable Development Goals. UNECE Executive Secretary Ms Olga Algayerova welcomed the strategy and emphasized the increasing recognition of the Convention as a legal instrument for technological risk reduction under these frameworks. She further highlighted that “the risk reduction community is increasingly looking at the Convention’s experience in the management of technological disasters, and the reduction of related risks.”

In this regard, the Convention has successfully enhanced its partnership with the United Nations Office for Disaster Risk Reduction, and other relevant international organizations. The Conference adopted the workplan 2019-20 which will be the first to implement the long-term strategy, through activities to foster outreach, awareness-raising and strategic partnerships, facilitate implementation for all Parties and deliver capacity development through the Convention’s Assistance and Cooperation Programme.

By adopting the long-term strategy, the Conference agreed to rebrand the prior “Assistance Programme” to “Assistance and Cooperation Programme”, to highlight the increasing cooperation among countries with economies and transition, which it encouraged to further develop. A primary example for such cooperation has been the Project to Strengthen Industrial Safety in Central Asia, which has been implemented in all countries of Central Asia in the past two years, and successfully supporting their further progress towards the implementation of the Convention, with financial and expert support by the Russian Federation and expert support by Belarus.

The meeting kicked off with the Seminar on Risk Assessment Methodologies which provided an opportunity to understand existing approaches and good practices this field. The seminar highlighted that risk assessment is crucial to prevent industrial accidents under the Convention, and more broadly, needed to support countries’ efforts to manage technological hazards and reduce related risks under the Sendai Framework.

The meeting also provided an opportunity to highlight the achievements of the Joint Expert Group on Water and Industrial Accidents at the occasion of its 20th anniversary. To avoid the recurrence of an accident like the one in Sandoz, Schweizerhalle, which triggered the Convention’s negotiation more than 30 years ago, the Conference adopted the Safety guidelines and good practices for the management and retention of firefighting water which was developed by the Joint Expert Group.

It was acknowledged that while safety standards have improved globally, a similar accident could still happen today, even in countries with an advanced level of industrial safety, and therefore further implementation of the Convention’s provisions, tools and guidance materials and transboundary cooperation is key.

In this spirit, and building upon the Convention’s achievements, the decisions made at the Conference of the Parties come as an important step in countries’ efforts to further strengthen industrial safety, enhance technological disaster risk reduction and protect lives and livelihoods from major accidents, in line with important global commitments such as the Sendai Framework and the SDGs.

Note to editors
About the UNECE Industrial Accidents Convention

The UNECE Convention on the Transboundary Effects of Industrial Accidents aims to protect people and the environment against industrial accidents. It was adopted in 1992 and entered into force in 2000. It is designed to help prevent accidents from occurring, reduce the frequency and severity of such accidents and to mitigate their effects if they should occur. To date there are 41 Parties to the Convention, which include the European Union (EU) and 26 of the EU member States (without Ireland and Malta), Albania, Armenia, Azerbaijan, Belarus, Bosnia and Herzegovina, Kazakhstan, Monaco, Montenegro, Norway, the Republic of Moldova, the Russian Federation, Serbia, Switzerland and the former Yugoslav Republic of Macedonia.

About the Sendai Framework

The Sendai Framework for Disaster Risk Reduction 2015 – 2030 was adopted by UN Member States on 18 March 2015 at the Third UN World Conference on Disaster Risk Reduction in Sendai City, Miyagi Prefecture, Japan. It outlines seven clear targets and four priorities for action, with the aim of preventing new and reducing existing disaster risks and associated losses in lives, livelihoods and health.

About the Tenth meeting of the Conference of the Parties

The tenth meeting of the Conference of the Parties took place at the Palais des Nations in Geneva from 4 to 6 December 2018. For more information, please visit http://www.unece.org/index.php?id=46249

The seminar on risk assessment methodologies was held on 4 December 2018. For more information, please visit: http://www.unece.org/index.php?id=50370