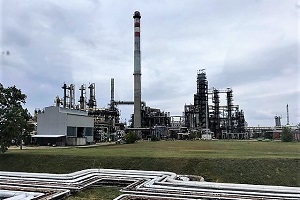 On 4 December 2018, more than 30 years after the transboundary environmental disaster at Sandoz, Schweizerhalle, and more than 25 years after the adoption of the UNECE Convention on the Transboundary Effects of Industrial Accidents, the 10th meeting of the Convention’s Conference of the Parties will open its doors to more than 100 representatives from over 40 countries, representing national delegations from the UNECE region and beyond, academia, the private sector and NGOs.

The Conference will review the Convention’s achievements in improving industrial risk management and will be looking ahead, with a view to adopting its workplan for the next two years, and a long-term strategy to 2030, in order to further strengthen the prevention of and preparedness for industrial accidents and enhance technological disaster risk reduction. The strategy sets out the Convention’s vision “to significantly improve industrial safety and reduce the risk of technological disasters by ensuring full implementation of the Convention, its wide recognition as a legal instrument for risk reduction under the Sendai Framework and its contribution to achievement of the Sustainable Development Goals.”

Furthermore, the Conference of the Parties will revisit an amendment that would – if adopted –strengthen public information and participation and open the Convention for accession by United Nations Member States worldwide. This would make it the first global treaty in this field.

The Conference will begin with a seminar on risk assessment methodologies (4 December), to inform the industrial safety and risk reduction communities about the role of effect and risk assessment methodologies in industrial accident prevention, preparedness and response. Risk reduction is crucial not only in view of the Convention’s aspirations to manage technological hazards and reduce related risks, but also in view of the targets and priorities set out in the Sendai Framework for Disaster Risk Reduction.

The Conference will naturally review the activities implemented during the past biennium, which have benefited the majority of countries the UNECE region, and beyond, including through workshops on land-use planning and natural-hazard triggered industrial accidents (NATECH). Moreover, dedicated assistance activities have benefited almost all countries in Eastern and South-Eastern Europe, the Caucasus and Central Asia.

The Conference will also mark the 20th anniversary of the Joint Ad Hoc Expert Group on Water and Industrial Accidents, which has assisted countries in the prevention of accidental pollution of transboundary waters. To avoid the recurrence of an accident like the one in Sandoz, Schweizerhalle, the Joint Expert Group developed Safety guidelines and good practices for the management and retention of firefighting water which will be reviewed by the Conference.

The UNECE Convention on the Transboundary Effects of Industrial Accidents aims to protect people and the environment against industrial accidents. It was adopted in 1992 and entered into force in 2000. It is designed to help prevent accidents from occurring, reduce the frequency and severity of such accidents and to mitigate their effects if they should occur. To date there are 41 Parties to the Convention, which include the European Union (EU) and 26 of the EU member States (without Ireland and Malta), Albania, Armenia, Azerbaijan, Belarus, Bosnia and Herzegovina, Kazakhstan, Monaco, Montenegro, Norway, the Republic of Moldova, the Russian Federation, Serbia, Switzerland and the former Yugoslav Republic of Macedonia.

The Sendai Framework for Disaster Risk Reduction 2015 – 2030 was adopted by UN Member States on 18 March 2015 at the Third UN World Conference on Disaster Risk Reduction in Sendai City, Miyagi Prefecture, Japan. It outlines seven clear targets and four priorities for action, with the aim of preventing new and reducing existing disaster risks and associated losses in lives, livelihoods and health.

Tenth meeting of the Conference of the Parties

The tenth meeting of the Conference of the Parties will take place at the Palais des Nations, in Geneva, in Salle VII, from 4 to 6 December 2018. For more information, please visit http://www.unece.org/index.php?id=46249