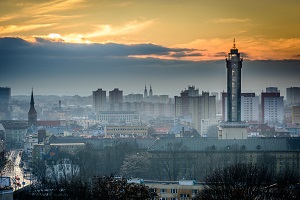 Leaders of countries in Europe and Central Asia need to scale up action to prevent environment-related deaths and diseases affecting their populations. This is the call from the heads of the World Health Organization Regional Office for Europe (WHO/Europe), the United Nations Economic Commission for Europe (UNECE) and the United Nations Environment Programme (UNEP) at the opening of the Sixth Ministerial Conference on Environment and Health in Ostrava, Czech Republic

Approximately 500 representatives from the 53 countries of the European Region gather on 13-15 June 2017, together with international and non-governmental organizations, to commit to prioritizing action on environmental risks to health.

Each year, at least 1.4 million people in the region die prematurely due to polluted environments, corresponding to at least 15% of Europe’s total deaths. Around half of these deaths are due to outdoor and indoor air pollution. Altogether, European citizens lose annually 50 million years of healthy life because of environmental risks.

“In the era of Sustainable Development, we can prevent the 1.4 million environment related deaths by making health a political choice across all government sectors,” said Dr Zsuzsanna Jakab, WHO Regional Director for Europe. “We urge all European leaders to take this opportunity for more sustainable policies to address the health challenges of the 21st century.”

“We have enough evidence. We have solutions at hand. What we need is action,” agreed Ms. Olga Algayerova, newly appointed Executive Secretary of UNECE. “Examples of solutions developed over the past 20 years by UNECE and WHO/Europe with a proven track record include the Convention on Long-Range Transboundary Air Pollution, the Protocol on Water and Health and the joint Programme on Transport, Health and Environment. However, we must do more to fulfil their potential to clean the air and water, promote smart cities, and clean transport systems. And while doing more, we must build on the synergies embedded in the Sustainable Development Goals.”

Environmental risk factors are responsible for around 26% of ischemic heart disease, 25% of strokes and 17% of cancers in Europe. Cardiovascular deaths and diseases from environmental exposures are three times higher in low and middle-income countries than in high income ones.

"Successful cooperation among UNECE member States has led to significant reductions of air pollution in the region - thereby saving lives”, said Ms. Olga Algayerova. “All recent studies show that this work needs to continue and be strengthened, and lessons learned should be shared with other regions.”

Financial constraints, inequalities, extreme weather events from climate change, a rise in non-communicable diseases, the ageing of the population, rapid urbanization and unprecedented levels of migration exacerbate environment’s impacts on the health of Europeans.

By 2030, 8 out of 10 Europeans will be living in cities. The most vulnerable –children, the poor, the marginalized, migrants – will be disproportionately affected by exposure to multiple environmental hazards in cities.

The new WHO report, Environment and health for European Cities in the 21st century: making a difference, developed jointly with UNECE and UNEP, makes the case for investing in cities to improve people’s health and reduce inequalities. Cities are one of the main priorities in Europe’s agenda at this Ministerial Conference.

The Environment and Health Ministerial Conference in Ostrava is the sixth such meeting. The Conference marks a process initiated almost 30 years ago to eliminate the most significant environmental threats to human health.

Organized by WHO/Europe, in partnership with UNECE and UNEP and hosted by the government of the Czech Republic, the Conference will redefine Europe’s approach to the challenges faced. Countries are expected to develop national portfolios for action across sectors on environment and health, based on their priorities among the seven themes outlined at the Conference: air quality; chemical safety; climate change; environmentally sustainable health systems; waste management; water, sanitation and hygiene; and cities.