On this day 35 years ago, 34 Governments and the European Community signed the Convention on Long-range Transboundary Air Pollution (Air Convention) out of a growing awareness that the ecological and human health problems throughout the region were caused by air pollution which did not respect borders and  often  originated outside of the country experiencing its adverse effects. Such problems included the die-back of forests, fish loss in lakes and damage to vegetation and materials. The signatories agreed to cooperate across the United Nations Economic Commission for Europe (UNECE) region in order to gradually reduce and prevent air pollution, including long-range transboundary air pollution, thus creating the first international legally binding instrument to deal with problems of air pollution on a broad regional basis. As of today, the Convention has been signed by 51 of the 56 UNECE member States.

Since 1979 the Convention has provided a framework for scientific collaboration and policy negotiation across the region. Through the implementation of eight protocols, which set national emission targets and identify specific measures for cutting emissions across a wide range of sectors, some of the region’s major environmental problems have been successfully addressed. In particular, emissions of sulphur dioxide have been reduced by 70 per cent, emissions of non‑methane volatile organic compounds have been cut by 50 per cent and nitrogen oxide emissions stand at 40 per cent less than their 1990 levels (see figure). Initially focused on problems of acidification and eutrophication, the scope of the Air Convention has since been widened to address ground-level ozone, persistent organic pollutants, heavy metals and, most recently, particulate matter. 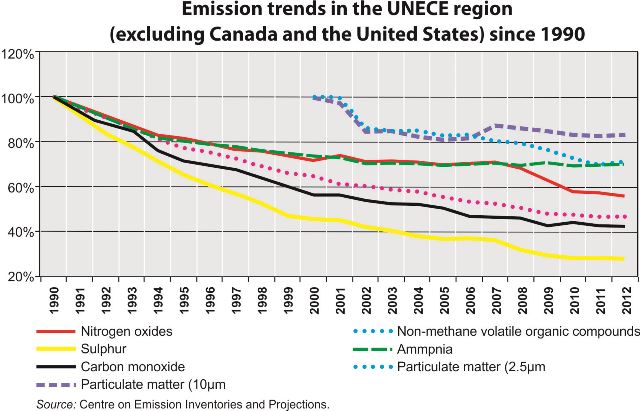 However, implementation challenges persist, particularly in countries of Eastern and South-Eastern Europe, the Caucasus and Central Asia, where needs-driven technical assistance remains a strong priority for UNECE to facilitate an increase in membership in the Convention and its most recent protocols across the region, a key to addressing transboundary pollution effectively. Some gaps also remain in Western Europe, mainly in complying with the emission ceilings set for ammonia and nitrogen oxides under the Convention’s Protocol on the Abatement of Acidification, Eutrophication and Ground-level Ozone (Gothenburg Protocol). In order to meet the targets set under all its protocols, UNECE is increasingly considering the need for intersectoral cooperation, as many different sectors contribute to national emissions of air pollutants including industry, housing, transport and agriculture.

In particular, the impacts of air pollution on health are receiving growing attention following the recent classification of air pollution by the World Health Organization (WHO) as the world’s largest single environmental health risk, causing cardiovascular and respiratory diseases. According to WHO, air pollution was responsible for an estimated 600,000 deaths in the European region in 2012 and 7 million deaths per year globally, the latter representing a burden of disease that may now exceed the burdens of malaria, tuberculosis and AIDS combined.

Consequently, with a view to ensuring a better environment and human health for future generations, ministers from throughout the region will discuss the improvement of air quality as part of the Eighth Environment for Europe Ministerial Conference in Georgia in 2016. Notes to editors:

Long-range transboundary air pollution means air pollution whose physical origin is situated wholly or partly within the area under the national jurisdiction of one State and which has adverse effects in the area under the jurisdiction of another State at such a distance that it is not generally possible to distinguish the contribution of individual emission sources or groups of sources.

The 1999 Gothenburg Protocol to Abate Acidification, Eutrophication and Ground-level Ozone entered in to force in 2005. The Protocol sets emission ceilings for pollutants such as sulphur and nitrogen oxides, non-methane volatile organic compounds and ammonia. The Protocol also sets tight limit values for specific emission sources (e.g., combustion plants, electricity production and vehicles) and requires best available techniques to be used to keep emissions down. The protocol was amended in 2012 (though the amendment is not yet in force) by including emission reduction commitments for the year 2020 as well as by adding reduction commitments for fine particulate matter.

The Environment for Europe process is a unique partnership of UNECE member States, United Nations organizations represented in the region, other intergovernmental organizations, regional environmental centres, non-governmental organizations, the private sector and other major groups. The process and its ministerial conferences provide a high-level platform for stakeholders to discuss, decide and join efforts to address environmental priorities across the 56 countries of the UNECE region.