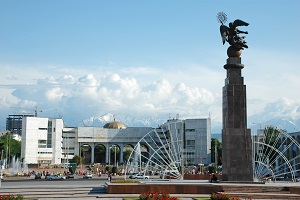 Trade facilitation is at the centre of the policy agenda for regional integration among the transition economies in Central Asia. UNECE has been a resolute partner, supporting countries’ efforts to achieve their trade-related policy-priorities. The Kyrgyz Republic is one of the Central Asian countries eyeing greater trade facilitation reforms to improve its competitiveness, diversify and grow exports and pursue greater regional trade-integration  In doing so, the country is also strengthening trade as means of implementing the Sustainable Development Goals  (SDG) as stipulated in SDG target 17.10.

At a virtual launch meeting on 29 May 2020, Mr. Aydin Sharsheev, State Secretary of the Ministry of Economy of the Kyrgyz Republic expressed his gratitude to UNECE for the continuous support to his country. “The support provided by the UNECE will be crucial to strengthen the capacity of the National Trade Facilitation Council and its activities especially during this period of coronavirus pandemic”, he noted. Ms. Maria Ceccarelli, Chief of UNECE’s Trade Facilitation Section, reaffirmed the organization’s commitment to support the Kyrgyz Republic’s response to the crisis. The project will be adjusted to help the country address the challenges arising from the pandemic, supporting much needed efforts to spur a rapid and sustainable economic recovery.

Deliverables expected under the project include the development of the National Trade Facilitation Roadmap, support to the Trade Information Portal, the organization of capacity building events on WTO TFA provisions as well as the development of online and practical training materials. Project activities will be based on the trade facilitation recommendations and electronic business standards developed by the UN Centre for Trade Facilitation and Electronic Business (UN/CEFACT), a subsidiary body of UNECE, a global  leader in the development of such tools. While international travel is still prohibited, the project activities will be carried out using online virtual platforms. The Ministry of Economy and the Kyrgyz Economic University will be collaborating with this project, which is expected to deliver its results by end of 2021.

The implementation of this project is expected to improve the trade facilitation performance of the Kyrgyz Republic. According to the Global Survey on Digital and Sustainable Trade Facilitation 2019, the country’s trade facilitation implementation was below 40%, compared to an average of 69% in the UNECE region. This project is a continuation of the UNECE Project Strengthening national capacity of trade-support institutions of Kyrgyzstan (completed in 2018), which contributed to the increased capacity of national trade support institutions to provide training for traders and government officials, and increased understanding of traders and government officials of international and national trade-related regulations, policies, trends and issues.