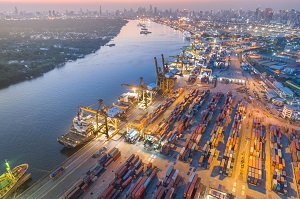 Harmonizing and standardizing not only trade procedures, but also the accompanying information flows, can unlock significant time and cost savings. For this, using the same terminology and the same semantics of terms in different languages is crucial.

To support this aim, UNECE has today released a third, revised edition of the Glossary of Trade Facilitation Terms. For the first time, the Glossary incorporates a Chinese version of the terms, in addition to the English-Russian version, so that many more participants in international trade (including now from the world’s second largest economy) can benefit from this practical resource.

The revised Glossary is available in digital format, for use on portable devices for more efficient use right in the field of operation. With this trilingual tool, specialists will have time and cost-saving trade opportunities throughout Eurasia and beyond, right in their pockets. The ambition is to develop the Glossary in the six official languages of the United Nations. The Glossary represents a dictionary of terms that are widely used in trade facilitation. The previous English-Russian versions have been widely used by specialists, policy-makers and implementers. A curious instance of the utility of the Glossary was the request for copies of its very first edition by Swedish Customs officers working at border-crossing points, who used it as an invaluable communication tool with Russian-speaking transporters of goods, such as ship crews.

The third edition includes new terms in trade facilitation, following the adoption of the WTO Trade Facilitation Agreement, and electronic business. It is based on many years of experience at UNECE, tapping into the wealth of knowledge of experts of the United Nations Centre for Trade Facilitation and Electronic Business (UN/CEFACT).

UNECE and its subsidiary body UN/CEFACT have been developing concepts and instruments for trade facilitation and e-business for decades. Global experts have recognized the usefulness of common standards and best practice recommendations, which enable businesses and government stakeholders to exchange information and cut red tape. Using the same standards means speaking the same language for multiple stakeholders in international trade. UN/CEFACT retains its role as a semantic hub for trade facilitation, as reflected in the Glossary of trade facilitation terms.

Helping to realize the objectives of sustainable economic growth set out in the 2030 Agenda, the purpose of trade facilitation is to eliminate the waste of human and material resources, which go down the drain due to bureaucratic, repetitive and often unnecessary procedures and activities. If properly implemented, trade facilitation measures increase the efficiency of both trade transactions and regulatory controls.

The Glossary was prepared by UNECE in cooperation with the China National Institute for Standardization (which provided translation into to Chinese) and the Eurasian Economic Commission.

The Glossary is available at: https://www.unece.org/DAM/trade/Publications/ECE_TRADE_377Rev.2.pdf